The Hawaii Department of Land and Natural Resources (DLNR) is developing new tools and mechanisms to offset losses of Hawaii’s coral reefs. These losses can be from either permitted actions (such as harbor improvements) or unplanned impacts (such as ship groundings). In order to strive for no-net-loss of aquatic natural resources, DLNR is seeking to establish a Mitigation Bank to provide compensatory mitigation for impacts associated with permits issued by the US Army Corps of Engineers. Compensatory mitigation involves a selected site where the resources are improved through restoration; the resource gain is then available to offset a loss resulting from an impact or action. Establishing a mitigation bank is a lengthy process which must be reviewed and approved by the U.S. Army Corps of Engineers.

The first mitigation project currently underway is in Kaneohe Bay where four patch reefs are being restored by removing invasive alien algae that threatens coral survival.  The DAR field team uses the “SuperSucker”, a barge-based underwater vacuum, to remove the bulk of the algae. 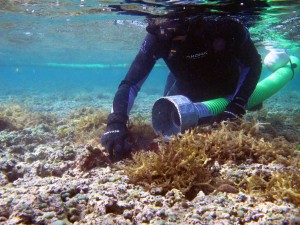 In order to keep the algae from regrowing, the team then adds native sea urchins that are grown specifically for restoration in the DAR aquaculture facility on Sand Island. The urchins are grazers, keeping the algae levels low and allowing to coral reef to recover.