Posted on Dec 8, 2015 in Announcements, featured 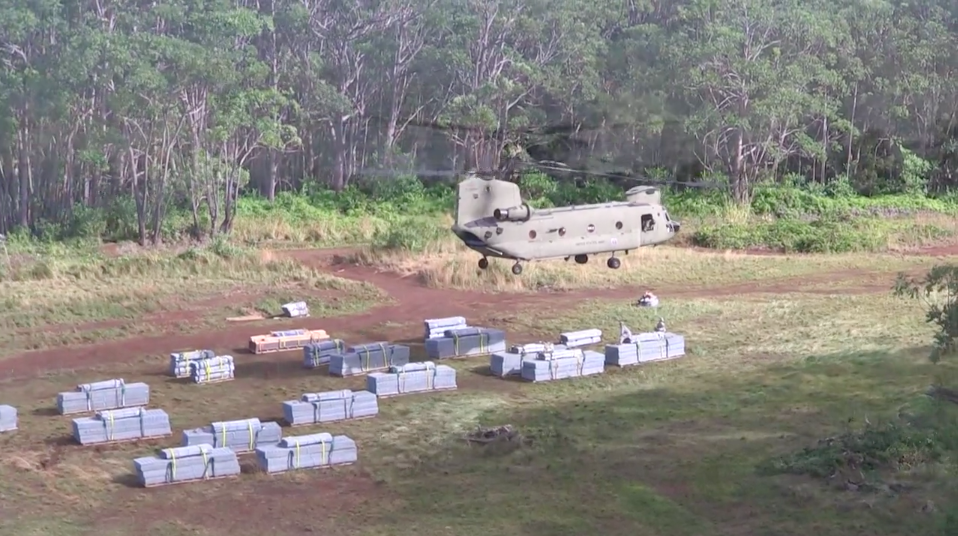 (HONOLULU) – Two massive, twin-rotor, CH-47 Hawaii Army National Guard Chinook helicopters airlifted some one hundred tons of fence panels, poles, and associated equipment to two separate locations in the Koolau Mountains on Oahu.  The materials will be used to erect predator-proof fencing in the Poamoho Forest Reserve and the Kaluanui Natural Area Reserve (NAR), both units of the DLNR Division of Forestry and Wildlife (DOFAW).

Marigold Zoll, DOFAW Native Ecosystems manager said, “Between the forest reserve and the NAR we’ll use these materials to construct fencing around an additional 1200 acres.  These two areas are critical watershed for the central and windward Oahu aquifers and they have numerous rare and/or endangered plants and animals.  The north unit of the Poamoho Forest Reserve has already been fenced and what was airlifted today will fence the south unit in addition to the recently designated Kaluanui NAR.”

This is not the first time DLNR has partnered with the Department of Defense. In 2013 the U.S. Army’s 25th Infantry Division’s Combat Aviation Brigade provided the airlift capacity to accomplish a task that without the Chinooks would take week’s rather than one day. In preparation for today’s 21 separate loads, bundled materials were previously strapped together on pallets with a total weight of approximately 11,000 pounds apiece.  By comparison, if the state had to rely on the contract helicopters it typically uses, they’d only be able to airlift 500 pounds in each load. Chris Miller, a specialist with the DOFAW NAR program coordinated today’s efforts. He said, “This state/federal partnership benefits everyone in the state of Hawaii. The Hawaii Army National Guard is able to conduct training for military operational readiness and the State saves a tremendous amount of money by accomplishing the entire airlift in one day.”

Coordination and execution of the airlift is a complex process. It involves procuring and preparing 200,000 pounds of materials both on the lift end and in the drop zones.  Every eventuality and aspect from communications to safety to weather is reviewed, considered, and ultimately incorporated into the final operational plans to ensure a successful conclusion. Work to build fences using the materials airlifted to Poamoho and Kaluanui today will begin immediately and is expected to be completed in 2016.