Posted on Dec 5, 2017 in Announcements, featured 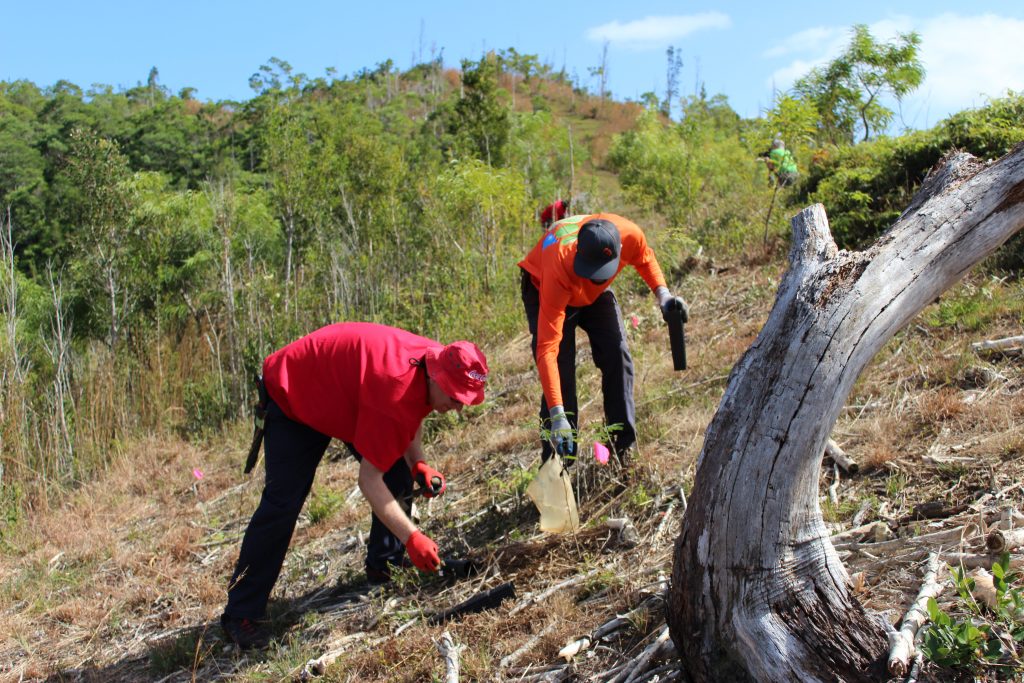 (HONOLULU) – Nine employees of the Coca-Cola Company based in Hawai‘i played hooky from work today.  They volunteered on behalf of the Ko‘olau Mountains Watershed Partnership (KMWP) by hiking up a trail on the west side of the mountain range in order to plant native koa.  This was a continuation of The Coca-Cola Company’s nationwide commitment to replenish all water it uses in its bottling operations. There are two bottling plants on O‘ahu and last April the company announced it was donating $200,000 to KMWP for ungulate fencing that eventually will surround much of the sprawling Waiawa Watershed, which supplies drinking water to the majority of O‘ahu’s residents. 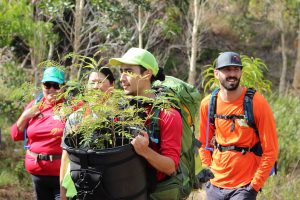 During their day of volunteer work the Coke employees learned about the importance of forest watersheds and how those replete with native plant species like koa, are much more efficient in retaining water and recharging supplies than forests covered by invasive plants and weeds. Today the volunteers planted 40, foot-tall koa trees.  Pua Heimuli, the community outreach liaison with KMWP explained, “In a couple of years these trees will double and triple in size.  They were planted in an area that was burned in a wild fire or destroyed by invasive animals like wild pigs. Within a decade the forest here will look dramatically different and be significantly better than it is today.”

Dora Wong, the director of public affairs and communications for Coca-Cola in Hawai‘i was one of the volunteers today. She said her company’s commitment to the Waiawa watershed fencing project is their first private-public partnership in Hawai‘i and is in keeping with the nationwide commitment to return water used in its vast array of bottling operations across the country.  “We hope other good corporate citizens and organizations will join The Coca-Cola Company in this effort.  It’s of particular importance here, as we’re all members of the community and we want to support Governor Ige’s 30 by 30 initiative; in which at least thirty percent of the state’s priority watersheds will be fully protected by 2030.”

The volunteers were joined by and led by the KMWP field team which regularly does this kind of work in the Ko‘olau Mountains. They’ll also be responsible for building the miles of fencing necessary to protect the watershed.  Heimuli said that Coke’s contribution is a huge boost to get the project started…money has already been used to purchase fencing materials and fly it into staging areas high in the mountains. She too hopes that other corporations will step forward to help fill any funding gaps from State coffers.