Below is a brief introduction to the 10 land snail families present in the Hawaiian Islands, listed from most speciose to least.

The family Amastridae is the most speciose family in the islands with 325 described species. Even more special is the fact that the entire family is endemic to the Hawaiian Islands. In general, Amastrids are considered to be ground dwelling or semi arboreal, and they are detritivores, feeding on dead and decaying leaves of native plants. Unfortunately this entire family has experienced catastrophic levels of extinction. today less than 20 species remain, and all are on the verge of extinction.

All 209 described species in the family Achatinellidae are endemic to the Hawaiian Islands, however other species in this family occur throughout Oceania. In general all species are cone-shaped and range in size from some of Hawaii’s smallest land snails at 2mm, to some of our largest at over 22 mm. This is perhaps the most well-known family because Achatinelinae, a sub-family within the Achatinellidae, contain all three genera of large arboreal tree-snails of which 44 species are listed on the U.S. Endangered Species List. The family is diverse with both arboreal and ground dwelling species. While the large tree snails give live birth, other smaller species such as those in the genus Auriculella lay eggs.

These flat round snails with a shell diameter of 3-10 mm resemble cinnamon buns, and can be found on the ground and in the vegetation. The Hawaiian Islands have 60 described species, but the family is distributed globally. Interestingly, the shells of the Euconulids are translucent, so the colors you see on the shell are actually the snails organs and body showing through.

Hawaiʻi has 42 endemic species in the globally distributed family Succineidae. These snails range in size from approximately 5-12 mm and are both arboreal and ground dwelling and lay large gelatinous egg masses. Locally, these snails are known as “Snot in a Hat,” because their large body often does not fit inside their small-flat shells. These are some of the most commonly observed snails along upper elevation hiking trails.

Pupillidae is a globally distributed family with 56 species endemic to the Hawaiian Islands. All species within this family are considered micro-mollusk with adult shell sizes being less than 3 mm. These tiny snails often go unnoticed as without a microscope they look like a grain of sand. However, under the microscope you will see that these snails have very textured, domed shells with whorls often stacking on top of one another resembling a bee hive. 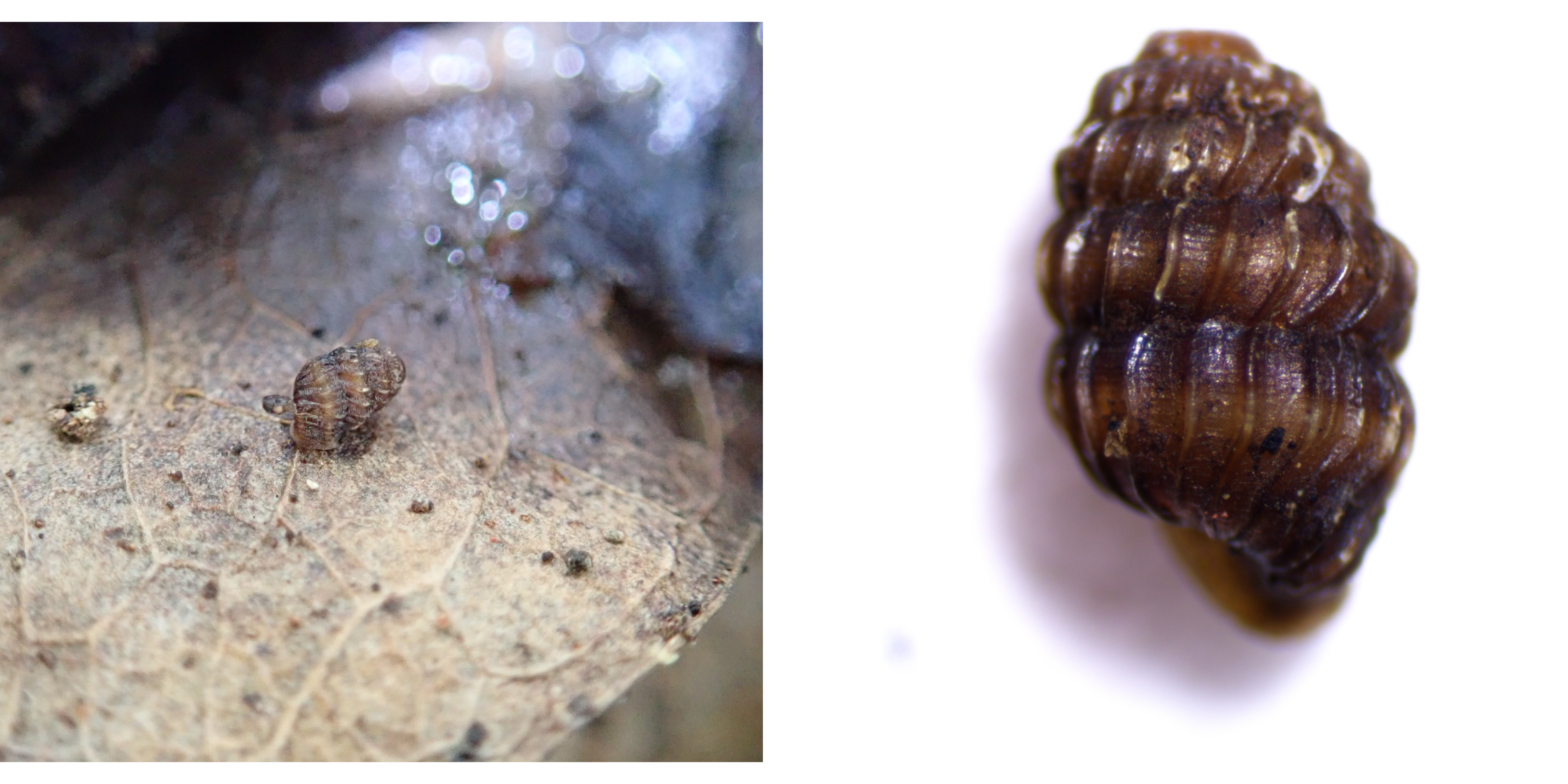 14 species of Helicinidae are endemic to the Hawaiian islands, although the family is distributed globally. Interestingly, this family is operculate, having a small “door” or hard piece on its foot that allows the animal to seal up tight, A common feature of inter-tidal and marine snails. The operculme protects the snails from predators and from drying out. Species can be both arboreal and ground dwelling. 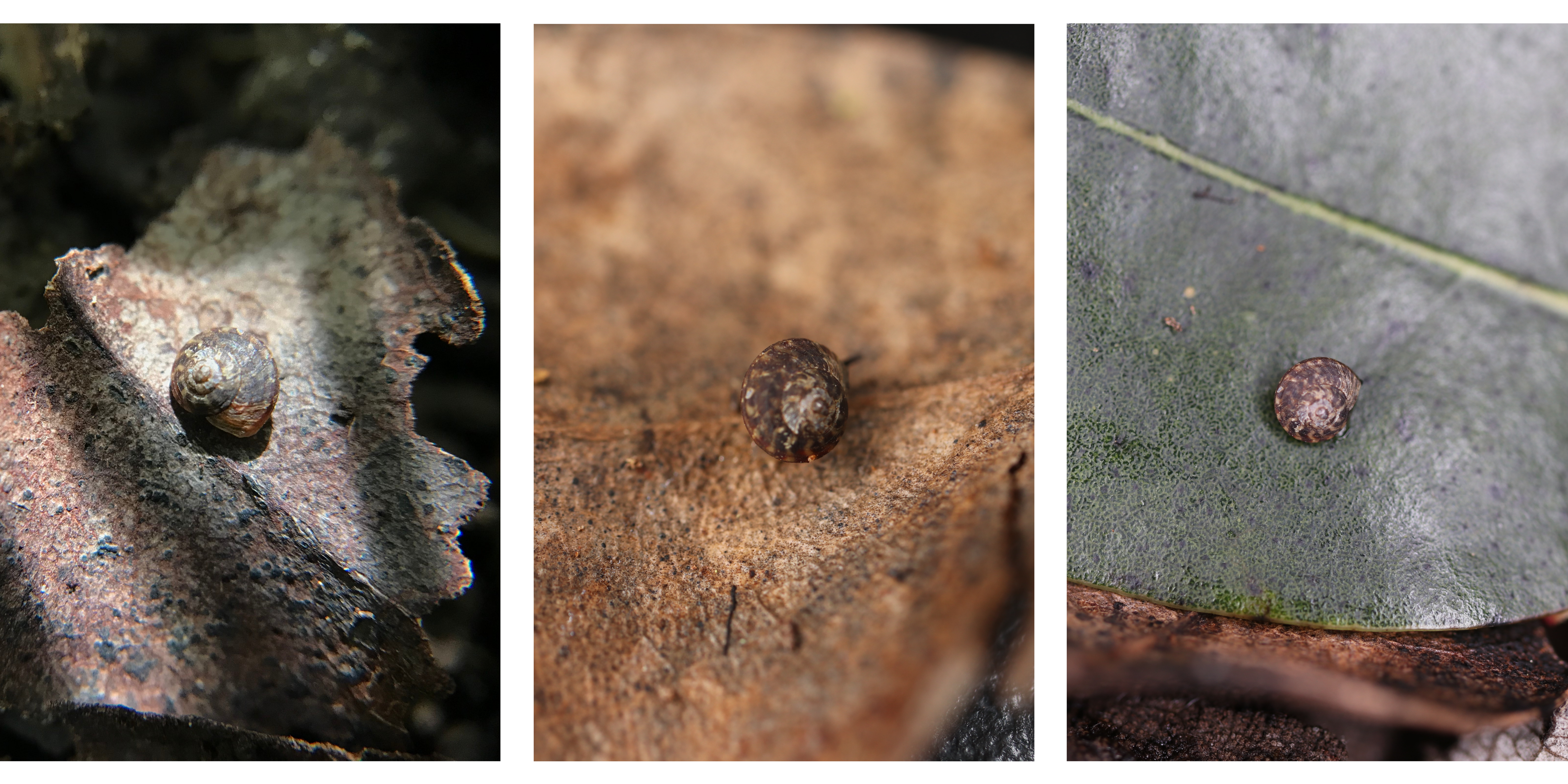 All 14 Hawaiian endemic species of this globally distributed family have small glassy shells approximately 2-10 mm in size. Little is know about these Hawaiian species.

There are two species of this family endemic to Hawaii. Representatives of hydrocenidae are distributed across the globe yet little is known about them. Like their helicinidae cousins, this family is operculate–a common morphological trait of inter-tidal and marine snails–allowing them to thermoregulate and defend themselves against predators. These members are herbivorous grazers feeding on detritus, algal spores, mosses and lichens. Hydrocenidae are petite measuring less than 10mm in diameter and less than 5mm in height.

Punctidae, commonly know as “dot snails”, have one Hawaiian representative of which little is know about this species. As their common name alludes, members of this family are minute in size. They live amongst the leaf litter in forests feeding on detritus.