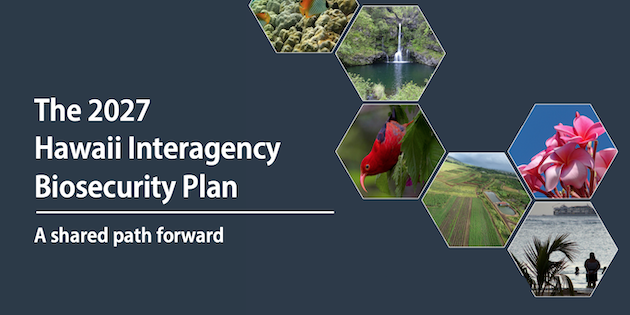 The Biosecurity Plan was developed in large part as a response to the previous economic downturn, when many biosecurity programs were reducted. We have since learned the costly lesson that investments in biosecurity save money in avoided damages and control efforts. As we face a new downturn due to COVID-19, the Biosecurity Plan framework suggests the following priorities in order to weather this trying period:

The scope of the Hawai‘i Interagency Biosecurity Plan addresses three biosecurity areas including pre-border (for example, agreements on handling and treatment of products before they enter the state), border (for example, inspection authorities and technologies), and post-border (for example, tools and capacity for response after invasive species have become established). The benefit of a comprehensive interagency plan is that it facilitates actions and policies across a wide range of agencies and partners. The plan includes roughly 150 action items assigned to various agencies and stakeholders, with specific details on how and when to best implement each action.

The plan is a strategic systems analysis, rather than an operational plan that analyzes response protocols for individual species. It identifies critical gaps in our biosecurity system and suggests policies, processes, and resources to address those gaps.

The HISC Support Program works with staff at each of the agencies listed in the Plan to update the status of each of the 147 action items every six months. Thanks to the work of teams at HDOA, DLNR, DOH, UH, and other partners, 57% of the action items in the plan have been initiated as of June 2020, despite only being 30% of the way through the 10-year implementation window. Full details of the implementation status of the Biosecurity Plan can be found at the links below. Past reports are available at https://dlnr.hawaii.gov/hisc/plans/hibp/.