Test Results: Wash-up of flying gurnards thought to be a natural event 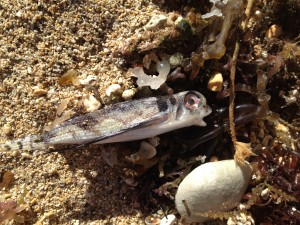 Flying gurnard on beach in Waikiki.

The wash-up of small flying gurnard fish on various Oahu beaches in July was likely a result of recruitment pulse events, with fish accidentally washing ashore.  Recruitment is a scientific term that describes the point in organisms’ life cycles when juveniles become adults. That’s the finding of the U.S. Geological Survey (USGS)-Biological Resources Division, which tested carcasses after the stranding’s on beaches from Fort DeRussy to Ko Olina during a two-week period in July. Carcasses from four beaches were tested, and the Diagnostic Case Report was submitted by the USGS to the Department of Land and Natural Resources (DLNR), Division of Aquatic Resources (DAR).  Field surveys showed the fish were behaving normally.  Additionally, tests found no evidence of infectious disease (viruses, parasites, fungi, bacteria) or any microscopic lesions that might indicate toxic disease. The USGS report also noted that a similar event was documented on Oahu in July, 2004 and that no significant lesions were found at that time.   Tests were conducted on fish collected at Fort DeRussy (2), Rock Piles (2), Kakaako State Beach Park(1) and Ko Olina (4). Beach goers who notice any unusual wash-ups of marine life are encouraged to report it to the Eyes of the Reef Network.  The link can be found on the DLNR Reef Response website, http://dlnr.hawaii.gov/reefresponse.