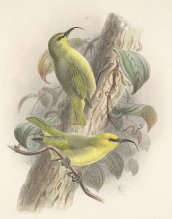 The Maui nukupu‘u is a large, short-tailed Hawaiian honeycreeper (Family: Fringillidae) with a long, thin decurved bill; the lower mandible is half the length of the upper mandible. Nukupu‘u also were known to exist on O‘ahu (H. l. lucidus)  and Kaua‘i (H. l. hanapepe); the O‘ahu subspecies is certainly extinct. Currently, all nukupu‘u are considered one species, however, ongoing research suggests that populations occurring on the three islands are distinct species. Adult males are olive green with a yellow head, throat, and breast and have a small black mask; females are olive-green above with a variable yellow-gray below. Little is known about the species’ life history. Nukupuʻu often found in hunting parties made of several species,  creeping along large ‘ōhi‘a (Metrosideros polymorpha) limbs searching epiphytes, moss, bark, and dead wood for arthropod prey; may also have taken nectar. Similar to the ʻakiapōlāʻau (H. munroi), nukupuʻu will hammer bark with lower mandible and use its upper mandible to fish out prey from excavations. No information on the species’ reproduction, but it thought to be likely similar to ‘akiapōlā‘au.

Poorly known. Probably extinct. Most recent sightings between 1,100 and 2,100 meters (3,600– 6,900 feet) elevation in the Kīpahulu Valley and the northeastern slope of Haleakalā. Last confirmed sighting was made in 1996 (UH PCSU, 2021). Historic range appears to be very restricted, although subfossil evidence suggests the species may have occurred in dry forests.

Mixed ‘ōhi‘a/koa (Koa acacia) forests and mixed shrub montane wet forests between 1,100 and 2,100 meters (3,600–6,900 feet). Historic and fossil evidence indicates that its range was much broader and remnant populations may have survived in marginal habitats. Habitat conditions of the species’ former range vary. Areas, where nukupu‘u were most recently sighted, are managed as a Forest Reserve by the State of Hawai‘i or by the National Park Service.

Unknown. However, the Maui nuku pu‘u was likely susceptible to the same factors that threaten other native Hawaiian forest birds including loss and degradation of habitat, predation by introduced mammals, and introduced disease. For Maui nuku pu‘u, the following was likely of particular concern: