Arrival of Rodents and Mongooses in Hawaii

Hawaii is the most isolated chain of islands in the world. Millions of years before the arrival of Polynesians, plants and animals arrived via wind, wings and waves. As they spread across the islands, many of these plants and animals changed over time, losing their defenses against predators that weren’t present, including rats, mice, and mongooses.

The Polynesian rats (sometimes called the Pacific rat) first arrived with Polynesians perhaps 900 years ago.  The Roof rat, Norway rat, and house mouse arrived after Western contact in the late 1700’s, and mongooses were introduced in 1883.  Rats, mice, and mongooses can now be found in urban, agricultural, and remote natural

areas, from sea level to 9,000 ft., and continue to have a large impact on native species, agriculture, and public health.

The introduction of rodents and mongooses resulted in, or contributed to, the extinction or endangerment of many native Hawaiian species.

Rats and mongooses are omnivores, consuming a wide variety of food items including seabird, waterbird, and forest bird eggs, chicks, and even adults, sea turtle eggs and hatchlings.  They also eat fruit, seeds, seedlings and flowers.  Rats and mice also kill plants by chewing off stems and stripping bark from small trees.  Rodents and mongooses also eat a variety of invertebrates such as native tree snails, slugs and insects.

Until recently, it was believed that people were responsible for the loss of palm forests on Rapa Nui (Easter Island) in their effort to move the large stone figures known as moai.  Archaeologist Terry Hunt’s work on Rapa Nui showed that introduced Polynesian rats feeding on palm seeds and seedlings prevented forest regeneration, which played a major role in the loss of native palm forests and subsequent population collapse (learn more here: https://www.researchgate.net/publication/275701235_Rethinking_the_Fall_of_Easter_Island ) 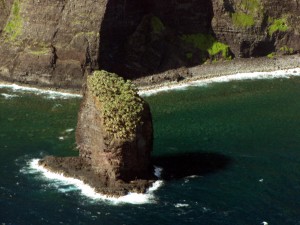 The loulu palms that cover the rodent free islet of Huelo (North of Molokai) are an indication of what Hawaii’s lowland forests may have looked like before the introduction of invasive rats.

Introduced rats are similarly responsible for the loss of vast lowland palm forests throughout Hawaiʻi. Areas like the Ewa plains were moist lowland loulu palm forests until rodents invaded and ate the seeds, flowers, and young palms.

From looking at the amount of different types of pollen in layers of soil, two of the most common plant species of early Hawai‘i are now nearly extinct because of rodents.  With the arrival and subsequent population explosion of Polynesian rats in Hawaiʻi came the corresponding loss of plants and the pollen produced by their flowers.  Loulu is a fan palm that formed forests in many lowland areas only exists as individual palms in remote forests, and the only remaining palm forest is on Huelo, a rodent-free islet off Molokaʻi.  Another formerly common plant, kanaloa, is down to a single, wild individual on a rodent-free sea stack off Kahoʻolawe.

Small Indian mongooses were introduced to several sugar growing islands. The introduction of mongooses to Caribbean islands in 1872 resulted in the extinction of half of 39 native skink species, and greatly reduced numbers of the remaining species.

Almost immediately after mongooses were introduced to Hawaiʻi, residents saw their impacts on chickens, game birds, and native ground-nesting nene geese. The nene population was estimated at 25,000 at the time of Western contact in 1778, but by the 1950’s ground nesting nene had dwindled to just 30 birds due largely to predation by mongooses and rodents. One study conducted in Hawai`i Volcanoes National Park demonstrated that 77 percent of Hawaiian goose eggs lost between 1978 and 1981 were lost to mongooses.

Hawaiian culture is intertwined with native Hawaiian plants and animals. Parts of native plants are used as tools, for houses, canoes, household and other daily items, and for medicinal purposes. Many native plants and animals are food items, found in stories, songs, chants, and place names, and even represent the physical forms of Hawaiian ancestral deities or family guardians. Although the Polynesian rat holds a place in Hawaiian culture (link to ‘Ōlelo no‘eau Puku‘i 1983), a balance must be struck to ensure the protection of native species in their last remaining habitats (link to Kahuli Aku, a traditional chant about native Hawaiian snails. Listen to the Kahuli Aku and view lyrics.). Through community engagement can lead to culturally and environmentally appropriate conservation and restoration plans.

Together, rodents and mongooses are carriers of more than 40 harmful human diseases such as rat lungworm, leptospirosis, murine typhus, rat-bite fever, Weil’s disease, Chaga’s disease, rickettsial pox, tularemia, trichinosis, Lassa fever, leptospirosis, salmonellosis, lymphocytic choriomeningitis, rabies, and bubonic plague (link to history of bubonic plague in Hawaiʻi ). Many of these diseases have an environmental/natural area component, and some that are particularly important to Hawaiʻi are described here.

In agricultural crops, stores, and food establishments saliva and feces from rodents and mongooses are also a public health concern. In food establishments, they can spread diseases and are an ever-present concern. See video of rats on the loose in downtown Honolulu (link) .More information on the rats and mice as vectors of human diseases can be found on the Hawaiʻi Department of Health’s website, (link https://health.hawaii.gov/san/files/2014/04/rodent-standard-vc-format-with-photo-credits-edit-04012014.pdf).

Rats and mice cause direct feeding and chewing damage to agricultural crops in Hawaii such as banana, lychee, macadamia nuts, rambutan, pineapple, coconuts, coffee, sugar, and other fruit and vegetable crops. In Hawai‘i, rats cause an estimated 5-10% damage to the annual macadamia nut crop on the Big Island. Rats like to nest in banana plants and cause damage to the green fruit. They also affect the harvest because of field workers’ reluctance to work rat-infested fields. Rodents also cause damage to seed sources, irrigation tubing, and agricultural storage areas.

Mongooses also have a long history of agricultural impacts since their introduction to Hawaii in the 1880s. A 1916 article details the attack of mongooses on farmed eggs, chickens and ducks in Kaimuki. On Maui, damages led to a bounty of 10 cents for every mongoose head turned in (see photo). To understand how mongooses had become such a problem, consider the math. Mongooses can produce an average of 36 young in a lifetime (approximately 4 years). The original introduction to Maui was 72 mongooses in 1883. If just half were female, and half of them survived, this would mean that there were 648 offspring produced in the next 4 years. If half of those were female, and if only half of those females survived to produce offspring, the second generation would result in 5,832 offspring. At this same rate, by 1916 there could have been millions of mongooses on Maui.