Take a journey through Mauna Kea’s high-elevation dry forest. High above tropical rain clouds, this forest has adapted to an extremely dry and cold climate normally found on continents. You will see plants and animals found nowhere else in the world as you explore this special place.

This forest is one of the last large tracts of dry forest left in Hawai‘i. While there are serious threats to this forest, restoration efforts are helping to protect this special home of a critically endangered bird, the palila. 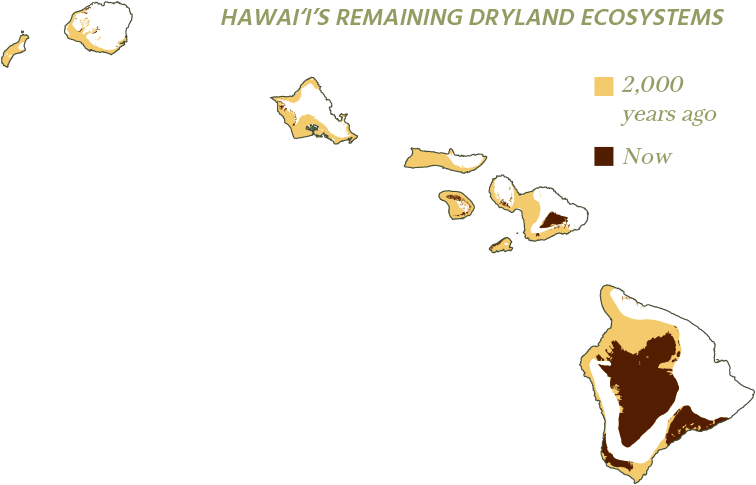 “If the sheep are allowed to stay for long, as they presently do, all the grass and forest of the place shall be consumed. It will be an evil thing…. “

—1856 letter from Isaac Y. Davis to Keoni Ana, Minister of the Interior, describing the impacts of feral sheep on Mauna Kea at the time. 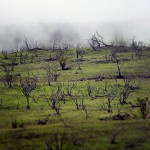 Over the past 150 years, most of the palila’s māmane forest was converted to pasture for cattle ranching. Today, less than 5% of this forest remains, and palila are now only found on the southwestern slope of Mauna Kea. 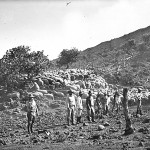 The high-elevation forest and summit areas were ranched for sheep between 1857 and 1905, before the area was designated as one of the first forest reserves. The forest began to recover after over 46,000 sheep were removed in the 1930s and 1940s.

In the early 1960s, a wild species of sheep from Europe, mouflon, was introduced on Mauna Kea for sport hunting. 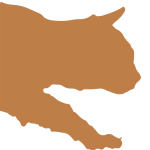 Feral cats, rats, and mongooses are a serious threat to our native birds. Stowaway rats came on the first Polynesian canoes, with other species arriving later on western sailing ships. Mongooses were introduced to control rats, and, though ineffective for this purpose, they instead take a toll on native birds and their eggs.

The non-native feral cat is the most serious predator to palila. Hawai‘i’s native birds did not evolve with any predatory mammals and are especially vulnerable to them. Each year, about 10% of palila chicks die from cat predation. 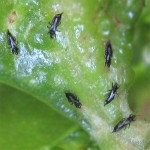 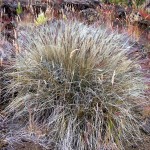 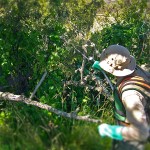 Invasive insects also threaten the plants and animals in this forest. Myoporum thrips feed on young leaves of naio trees, a common tree in the high-elevation dry forest. These thrips cause branch die-back, and can eventually cause tree death. In addition, non-native species of parasitic and predatory wasps and ants may reduce the availability of insect food sources for palila. 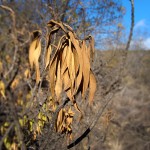 This area is naturally a dry forest ecosystem; however, global climate change is exacerbating drought severity. During drought, stressed māmane trees produce less pods—or none at all—meaning there are fewer pods for palila to eat. As a result, fewer nestlings are hatched, causing the overall population to decline.