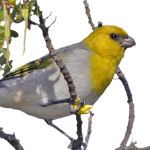 Found only on the upper slopes of the largest mountain in the world, Mauna Kea, the critically endangered Palila has a vibrant yellow head, a strong bill, and a delightful call.  This spectacular bird is an important part of our Hawaiian heritage worth protecting.

“…What is it that Emalani is doing?

the sweet voice of the Palila,

those birds that dwell upon the mountain….”

“Why are Palila special?”

Palila are endemic, occurring only in Hawai‘i and nowhere else in the world.  They are a classic example of the spectacular evolutionary process that occurred in the remoteness of the Hawaiian Islands where they survived in the dry forests for well over 100,000 years by adapting to a food source, māmane (Sophora chrysophylla) pods. The speciation that occurred in Hawai‘i dwarfs what was made famous by Charles Darwin in the Galapagos Islands where 14 species evolved from an original species. In Hawai’i, there were 55 species that evolved from the original species, most likely a Eurasian rosefinch that arrived from Asia. Palila belong to a group of birds called the Hawaiian Honeycreepers, which also includes ‘i‘iwi, ‘amakihi, and ‘akiapōlā‘au. Many (38 out of 55) of the palila’s relatives in this family have already gone extinct. In fact, of the 16 finch-billed Honeycreepers (species with heavy, seed-eating bills similar to the palila’s bill) that are known from the main Hawaiian Islands, all have gone extinct except the palila. Māmane trees provides over 90% of the food in the diet of palila, making them a specialist and highly dependent on māmane trees for their survival. Similar to the soybean pods that we eat, māmane trees produce pods with highly nutritious seeds for palila to eat. Interestingly enough, these seeds are poisonous to other wildlife.  Their dependence upon māmane makes them an indicator species of the high-elevation dry forest, helping us monitor the health of the forest that they depend on. The decline of the palila population highlights that the forest is not healthy. The last remaining individuals are confined to a small portion of Mauna Kea. DLNR and their partners (The American Bird Conservancy, U.S. Fish and Wildlife Service, Natural Resources Conservation Service, Arbor Day Foundation, and hundreds of volunteers) are collaborating to restore māmane forests on Mauna Kea. We are fortunate to have the opportunity to restore the forest they depend upon in anticipation of a brighter future for this native bird. Palila belong here and are one of the things that makes Hawai‘i one of the most amazing places on the planet.

As one of the rarest bird species on the planet, palila are found nowhere else in the world, but a small area on Mauna Kea.  They are part of the diverse Hawaiian Honeycreeper group that includes the curved-billed ‘i‘iwi, scarlet ‘apapane, and parrot-like-billed kiwikiu. Distantly related to finches, the palila represent the last of the finch-billed seed eating birds in the main Hawaiian islands.

White wing bars are characteristic of the juvenile stage of palila.

Close up of toxic green māmane seeds that palila depend on.

Palila chick being fed by parent.

[three_fourth] Māmane (Sophora chrysophylla) is endemic to the Hawaiian Islands. It is the dominant tree in the high-elevation dry forest of Mauna Kea.  Māmane is in the Fabaceae (pea and bean) family. It can grow in the form of either a large shrub or a tree with some trees over 40 feet tall. Bright yellow flowers grow on māmane produce pea pods. The seeds contain toxic chemicals called alkaloids. The elevational range of māmane has been reduced on both ends by human conversion of forest for agriculture and by nearly 200 years of browsing by non-native ungulates. It now occurs as low as 5,800 feet in some areas to above 10,000 feet at the highest elevations. Immature, green māmane seeds are the main component of the palila’s diet, although they also eat flowers and leaf buds. Native caterpillars found in the pods eating māmane seeds are protein-rich and an important food source for the quick-growing nestlings and fledglings. Māmane trees growing across a large elevational range are a good indicator of suitable palila habitat, and currently palila occur where the elevational distribution of the māmane forest is greatest. This is because māmane trees at lower elevations produce flowers and pods at one part of the year, and then later in the year trees at higher elevations produce flowers and pods. Thus, the result is a year round food supply—an important characteristic for a bird with a small home range.

It is said that the māmane would bloom in such quantities that from Hilo, it looked like Mauna Kea was adorned in a lei. 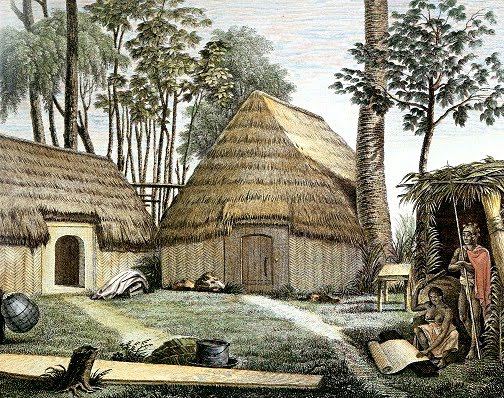 “…when Queen Emma went to [Mauna Kea and the lake] Waiau, she told my father that she wanted my mother to go as well. My father told her, she was pregnant, pregnant with me. But she wanted a woman to accompany her…. Queen Emma told my father, ‘if a son is born, name him Ka-hale-lau-māmane’ {the māmane-leafed shelter}….[When they traveled up Mauna Kea,] they broke the māmane branch, and made a house. You can go hide underneath, and you donʻt get wet.”

Historically, palila occurred on the islands of Hawai‘i, O‘ahu and Kaua‘i. On Hawai‘i Island, they inhabited the māmane forests on Mauna Kea, Hualālai, Mauna Loa and the saddle area in between. Today though, palila only live on a very small part of Mauna Kea’s southwestern slope where contiguous māmane forest still occurs between the elevations of 6,600 to 9,600 feet. This area represents less than 5% of the area they originally occupied on Hawai‘i Island. They disappeared from Hualālai in the late-1800s and were last seen on Mauna Loa in 1950. Palila that occurred in the lowland māmane forests of Kaua‘i and O‘ahu apparently disappeared before western explorers arrived; their presence there is only known from sub-fossil remains. 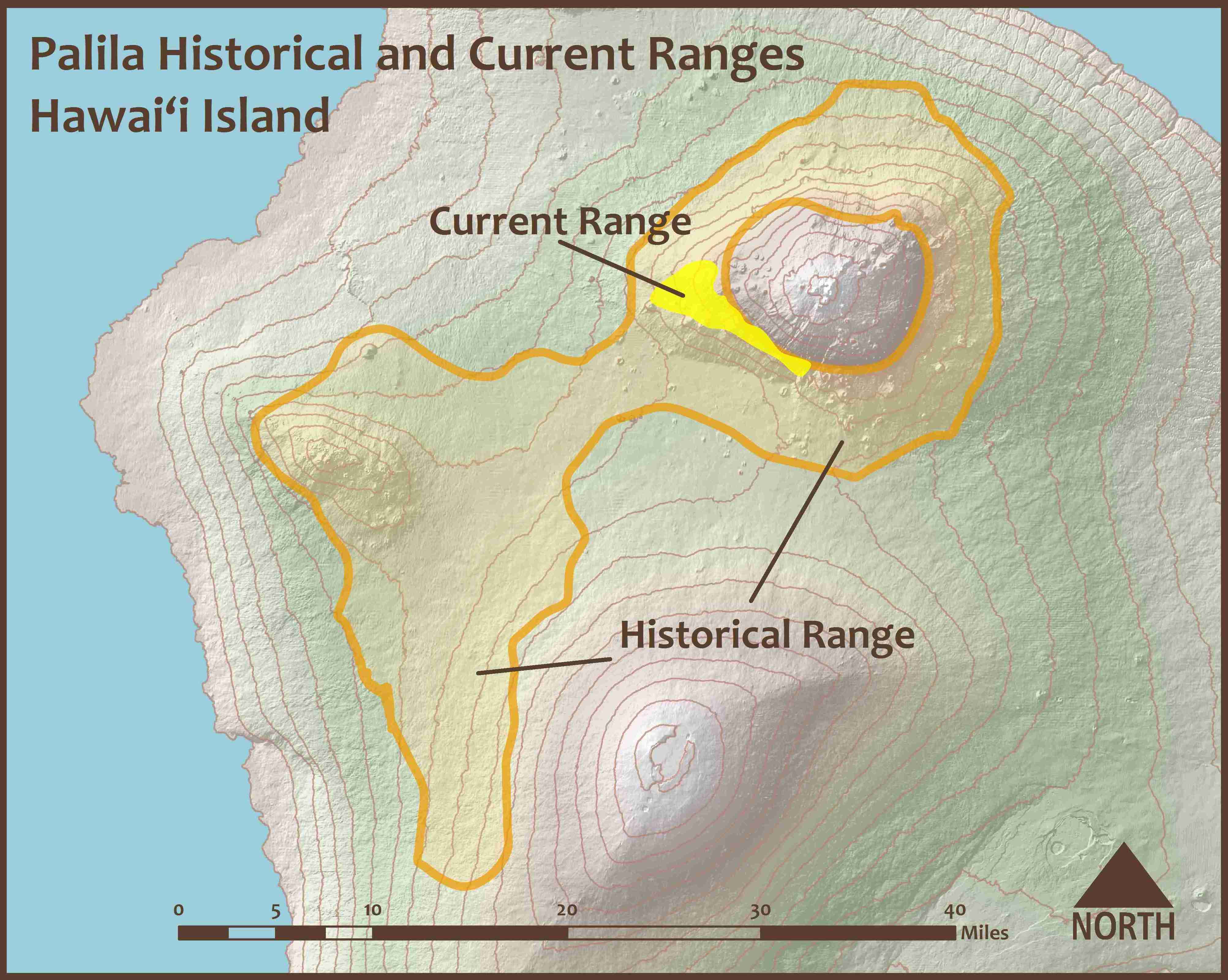 The Endangered Species Act of 1973 protects palila by providing for the conservation of ecosystems upon which threatened and endangered species of fish, wildlife, and plants depend, and prohibiting unauthorized taking, possession, sale, and transport of endangered species. Below is a summary of the colorful history of palila in court—the first species to ever be named as a plaintiff under the Endangered Species Act.