10/12/21 - [KAUAI] - Sections of the Waimea Canyon Lookout are currently CLOSED while repairs are done to the middle viewing deck. This project does not affect other lookouts in Waimea Canyon State Park and Kokee State Park.

Next week, work begins to demolish two structures that were built on top of the Lēʻahi Fire Control Station at the summit of Diamond Head Crater. The DLNR Division of State Parks (DSP) made the decision to do the demolition work due to safety concerns and the high cost of repairing the structures.

Diamond Head State Monument will be closed on Oct. 28 and 29, and then again November 1-5. The historic fire control station will be closed Nov. 6-19, and possibly longer depending on construction progress. 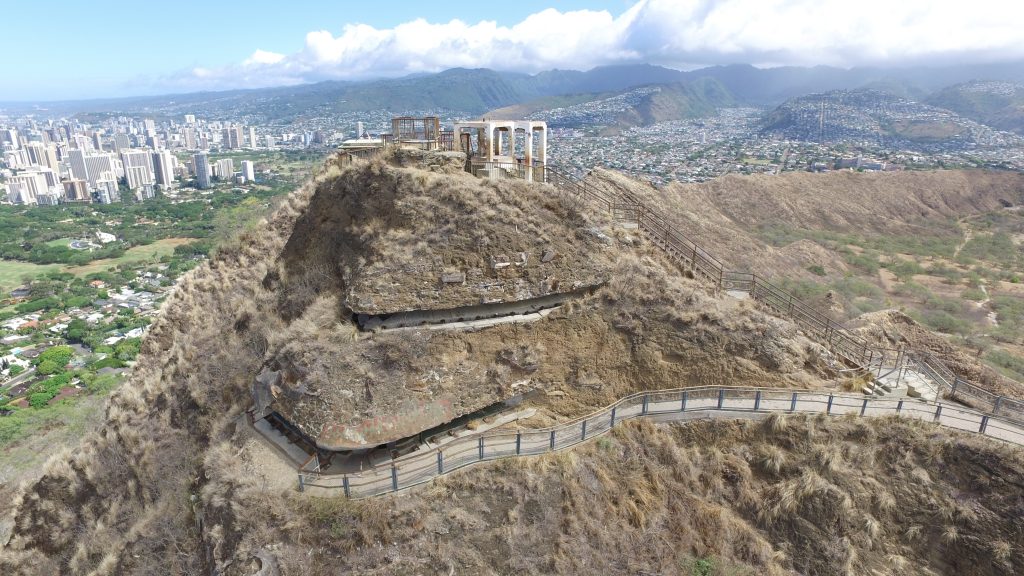 “We looked at the cost of repairing or reconstructing these structures, versus demolition. It was prohibitively expense to repair or reconstruct them, particularly in the context of other park priorities,” said Alan Carpenter, DSP Assistant Administrator.

DSP archaeologist Holly McEldowney said old photographs and other evidence suggests the two concrete and rebar structures were constructed sometime between WW II and the early 1950s and were additions to the fire control array which was completed in 1911.

Fire control stations were military installations that served as observation posts to spot and plot locations of potentially hostile warships and later, aircraft. The Lēʻahi station is particularly complex and is touted as the most elaborate and unique of its type in the U.S…”and one of the most unusual observing stations in the annals of coastal artillery.” It consists of four levels, individually excavated into the crater’s peak, which allowed surveillance of a broad expanse of O ‘ahu’s southern coastline.

Carpenter added, “We were not able to discover the purpose or function of the two column and slab roof structures. Despite posted danger signs and warnings to stay off them, people have been climbing on them for years, attempting to get better views. We don’t want anyone to get hurt and this is a primary reason we elected to remove the structures.  The decision was made easier by the fact that they are not part of the 1911 structure, so in a way we are restoring the original featureʻs integrity.”

During the demolition, protection measures will be in place to prevent damage to any of the other five historic features at Diamond Head’s summit. The work meets historic preservation standards for significant historic buildings and structures. The structures being removed have been thoroughly documented and photographed for historical preservation purposes.

A companion repair project involves repairing the concrete ceiling of the tunnel which serves as the main entrance to the Lēʻahi Fire Control Station. The tunnel is part of the original station and begins at the top of a 99-step stairway and extends 62-feet to the control station.

Carpenter explained, “These repairs are necessary because the concrete is deteriorating (spalling) and is destabilizing the integrity of the tunnel entrance. There was a risk of chunks of concrete falling on visitors.”

During the November closure a helicopter will be used to take equipment to the top of the crater.

McEldowney concluded, “Repairs to the main tunnel entrance of the fire control station will help preserve the historic character and integrity of this significant property and meets the U.S. Dept. of the Interior’s preservation standards.”