Select State Parks on Kauai Closed Due to Rain and Flooding

Polihale State Park, Hāʻena State Park, and the Nā Pali Coast State Wilderness Park are all closed due to the impacts of heavy rain fall, flash flooding, and landslides.

The entrance road to Polihale, on Kaua‘i’s west side, is flooded with numerous ponds of water along the route. Canal irrigation ditches have overflowed and is causing new erosion hotspots. The road is currently a river of mud. 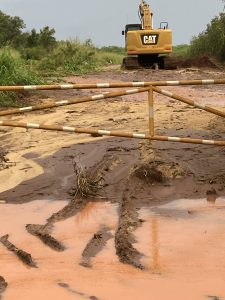 The DLNR Division of State Parks made road improvements during a lengthy closure associated with the COVID-19 pandemic last fall, including speed bumps to make it safer. The division reports when the road begins to dry the mud turns slushy, causing further damage including large potholes. Administrators say keeping vehicles out until post-storm maintenance and repairs are completed, will shorten the overall time needed to keep Polihale closed.

On Kaua‘i’s north shore, the Kalalau Trail in the Nā Pali Coast State Wilderness Park has been closed for a week due to the continuing threat of flash flooding along streams. The adjacent  Hāʻena State Park is also closed, due to a massive landslide near Hanalei which has blocked the Kuhiō Highway, the only route into both parks. Access to these parks will not be restored until the landslide is cleared and road repairs are made.