NĀPALI IS A TRULY HAWAIIAN PLACE.

It remains much as it was when the last native Hawaiians left their permanent settlements within its valleys nearly a century ago. However, deliberate and inadvertent activities of park users are taking their toll on the land. Every year, thousands of people enjoy the beauty of Nāpali, hiking and camping in its lush valleys. Most do not realize that for about a thousand years, Hawaiians lived here, farming, fishing and worshiping. Look carefully as you hike and camp, and you will see traces of their culture: irrigation ditches, terraced fields, house platforms, heiau (temples and shrines), and graves. The design of these places took into account the natural topography and environment, and as a result these ancient sites often blend into the landscape. The aspects of the land that Hawaiians sought for their sites—level ground, ocean access, and availability of fresh water–are also valuable to today’s park users, and so modern people find themselves treading on ancient sites.

For millions of years prior to Hawaiiansʻ arrival, mother nature created a unique and fragile natural ecosystem, and many species evolved here in isolation. Much of Hawaiiʻs flora and fauna is found nowhere else on earth, and Nāpali as well as adjacent undeveloped landscapes harbor some of the rarest and most unique life forms on earth. In particular, many native plants and bird species are critically endangered, and small impacts from people can have devastating effects on their long-term viability.

Simply walking the trail does not usually damage a site or the natural environment, but it is up to you to be careful and respect the heritage of the Hawaiian people. Here are a few ways that you can help protect our natural and cultural sites so that they can last another thousand years.

Stay on the Main Trail.

You will often see small side trails and short cuts, but you should also notice the impact of such trailblazing:  erosion, damage to terraces and walls, and the spread of alien vegetation. Please avoid using side trails or making new ones, and you will be protecting the natural environment and cultural sites (not to mention decreasing the odds of your getting lost or hurt).

Pack out what you pack in. 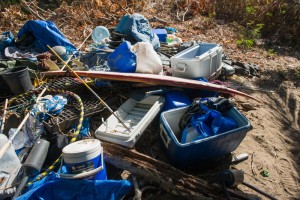 Every year, Parks staff and volunteers haul out tons of garbage and things left behind by careless campers. These special trips utilize scarce resources that could otherwise be spent on improving Nāpali. You are responsible for taking out what you bring in. After all, on the way out the load will be lighter, since you will have eaten food, consumed fuel, etc. Consider what you really need, and do not bring things that are unnecessary. The practice of “stashing” food and equipment are a major problem; Kalalau and other places are littered with everything from buckets of food to propane tanks, left behind by people who either did not care enough to remove them, or never came back to use them. In this tropical climate, sun, salt spray, and rain make most stashes unusable in a short time, and they end up as many small hazardous dumps on the land. People who make stashes do not consider the cumulative effect of the many other people like them.

Use Established Camping Areas and Toilets.

Lots of people come to Nāpali to get away from it all, and some choose to get a little more away by creating their own campsites. But by clearing vegetation, moving stones, and customizing a new campsite, you are often damaging cultural sites, as well as creating inroads for weeds and increasing the erosion hazard. Legal campsites extend from the first major dry stream to the west of Kalalau’s permanent stream, to the waterfall–an area roughly defined by the extent of the sand beach in summertime. Camping is prohibited in the valley, in caves and along Kalalau Stream. The same holds true for using the toilet–defecating on the ground is unsanitary, and digging a pit can damage irreplaceable ancient sites, not to mention defiling sacred places.

Leave your Pets at Home.

Dogs and cats have been responsible for large numbers of kills of threatened and endangered bird species in Hawai‘i, including recent documented cases on Nāpali. Many escape and become feral, forced to forage for food which increases that likelihood. Please obey the law and do not bring pets into the park.

Do not Make Fireplaces.

Open fires are prohibited in the park. However, many stone fire rings in the camping areas have been made by taking stones from ancient Hawaiian sites. Please do not dismantle our heritage by taking stones from terraces or walls. Also, never make a fire up against a rock wall or in a cave, as this can damage a site.

Leave Things Where They Are.

Occasionally, hikers will find a rock or artifact, and want to take it home a s a souvenir. Not only is this illegal, it is extremely inconsiderate of Hawaiians past and present. In addition to cultural materials, it is illegal to remove plants and other materials from the Park.

Take note of your surroundings, and appreciate the accomplishments of the ancient stone wall builders. Please encourage others to respect the sites as well, and if you see recent damage to rock walls or other features, please report them to the State Parks Division.