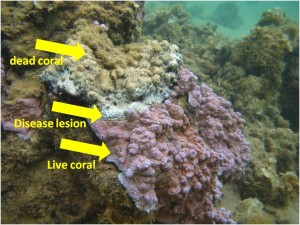 The black band disease was first spotted at low levels on Kaua`i in 2004, then identified on the North Shore of Kaua`i in 2012 at 10 times background levels by an Eyes of the Reef (EOR) Network member. The disease continues to negatively affect coral reefs throughout North Kaua`i.  The disease is affecting Montipora, or rice, corals and gets its name from the black band lesion (or wound) that it forms on the coral.  This lesion will quickly progress until the coral colony is completely dead.

In 2012, analysis was conducted by Dr. Sean Callahan’s lab and identified a cyanobacteria responsible for the disease lesions.  This type of disease has been seen in other areas of the world including the Caribbean and Indo-Pacific.  Since 2014, a team of researchers and managers have been working to identify environmental drivers of the disease and what, if any, management actions could be taken.

The team continues to together to review data, communicate findings, and identify potential management options related to the coral disease.  Dr. Greta Aeby’s coral disease lab at the University of Hawaii – Hawaii Institute of Marine Biology (HIMB) is studying the prevalence of the disease and has compared this to several environmental factors.  This was accomplished by overlaying information on where the disease is affecting corals and several environmental variables including water temperature, suspended sediments (visibility), and organic (land-based) sediments).  As of April 2015, 47 sites have been surveyed around the island of Kaua`i.

The Aeby lab has also been experimenting with a treatment method to stop the progression of the coral disease.  This method involves applying a marine putty onto the disease lesion (shown in image).  It has been successful in lab and field trials, reducing the amount of tissues loss in the affected coral colonies.  Despite its success, it is only feasible to use on a small scale because of the effort, time, and resources needed to apply the putty.

The following are results from the UH-HIMB black band disease research: 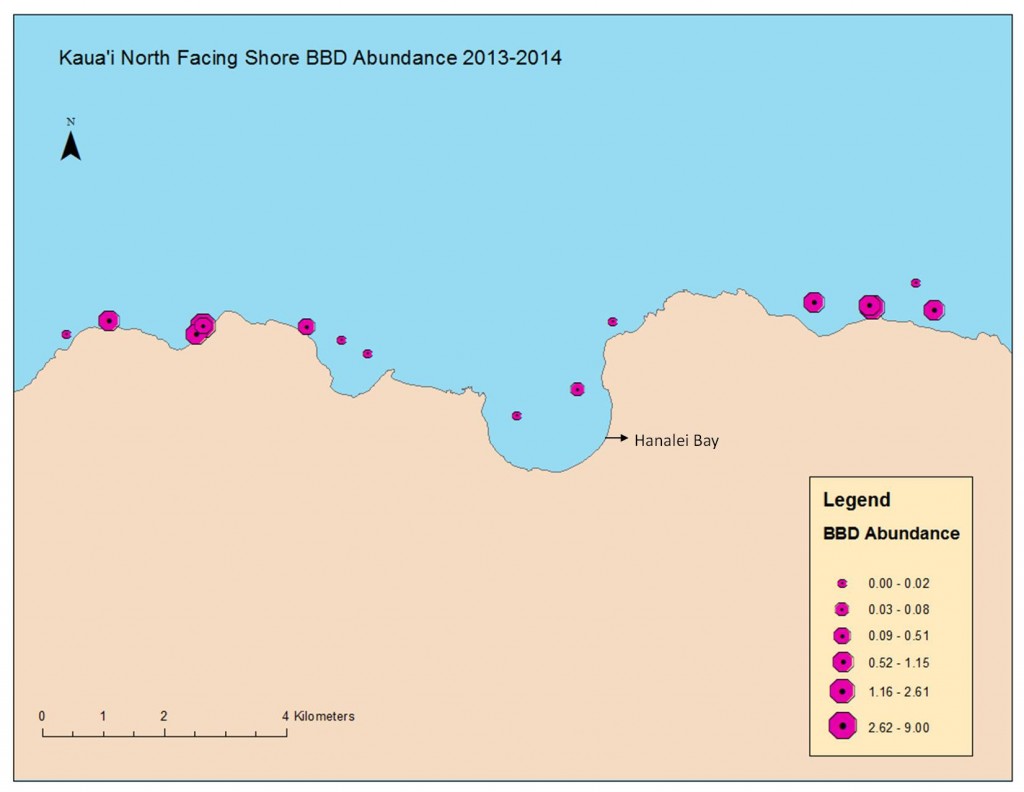 Science and management in the Hanalei watershed: USGS_Synethesis_Hanalei Bay 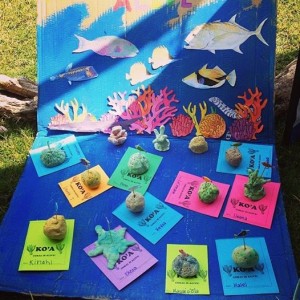 In March 2015, DAR and USGS facilitated a workshop to summarize develop science strategies that link environmental drivers with coral disease on the north shore of Kaua`i.  This initiated a new partnership with the USGS Pacific Coastal and Marine Science Center to develop a project investigating the relationship between the coral disease and groundwater inputs in the affected area.  This project will be carried out over the next 2-3 years.

The following actions were identified as priorities by the Management Response Team: 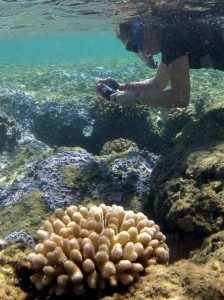 4.  Communicate findings to the public and Kauai community

What should I do if I see the black band disease?

If you observe the black band disease in a place where it has not been previously reported or in extremely high levels, please make an online report through Eyes of the Reef (EOR): www.eorhawaii.org/make-a-report.  Please send photos to: [email protected]

What areas are affected by the disease?

The coral disease is primarily affecting north shore reef areas on the island of Kauai.  There is a detailed map under the “Important Findings” tab, red dots indicate where the disease has been observed.

Is the cyanobacteria harmful to humans?

At this time, no correlation has been found between the cyanobacteria and disease in any species besides coral.