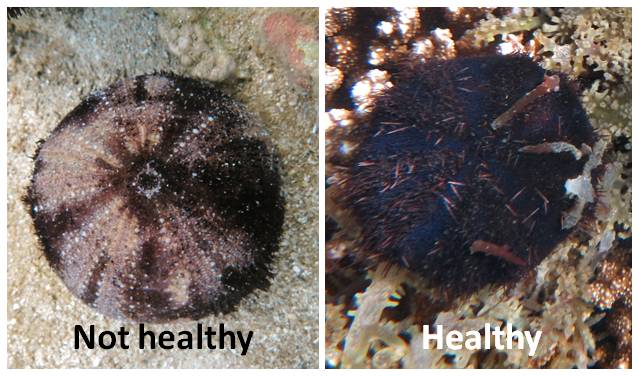 Sea urchins play an important role in the coral reef environment by grazing on algae. Collector sea urchins are currently being used by the Department of Land and Natural Resources (DLNR) and The Nature Conservancy (TNC) in Kaneohe Bay to control invasive algae that is killing coral reefs. Urchins are brought to Kaneohe Bay from the DLNR urchin hatchery and other areas around the island and placed in areas where there is a high volume of invasive algae.

Click here for more information about the sea urchin hatchery 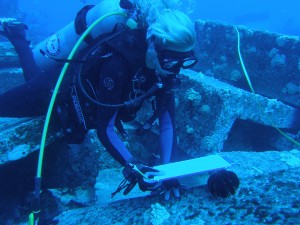 In late February 2014, biologists from TNC reported a large number of sick-looking collector sea urchins (hawae or Tripneustes gratilla) at the mudscow barge, an artificial reef, in Maunalua Bay on Oahu. The US Geological Survey (USGS) was notified and began an initial assessment through their Wildlife Health Center.

The preliminary diagnosis for the sea urchins is that it is a type of disease. The sick urchins have patchy loss of their spines and lesions (or wounds).  Sea urchin experts from the DLNR Division of Aquatic Resources (DAR) also participated in the initial monitoring and investigative work alongside USGS and TNC staff.

A “Call to Action” was sent out to the Eyes of the Reef (EOR) Network , asking the public to report any observations of sick-looking collector urchins through an online report found here: http://eorhawaii.org/make-a-report/.

In early May 2014, sick-looking urchins were also observed in Kaneohe bay, on the Windward side of Oahu. About 10% of urchins on one patch reef  showed signs of the disease at that time. 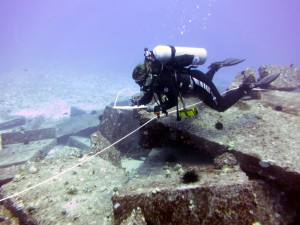 Monitoring on a monthly basis continues by a team composed of DLNR, USGS, and TNC staff. 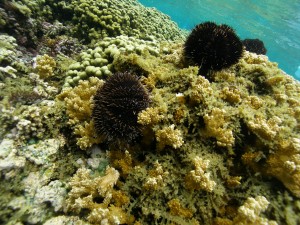 USGS continues to conduct lab studies to determine the exact cause of the disease and if the same disease is affecting urchins on Oahu and Maui.

What should I do if I see a large number of sick-looking urchins? If you observe large numbers of sick-looking collector sea urchins, please make an online report through Eyes of the Reef (EOR): www.eorhawaii.org/make-a-report. Please send photos to: [email protected].