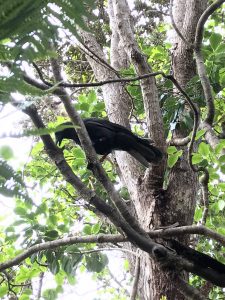 This September, seven additional ʻAlalā were released into the Puʻu Makaʻala Natural Area Reserve (NAR) on the windward slopes of Mauna Loa. This release is part of the ongoing reintroduction efforts being conducted by The ʻAlalā Project, a partnership between the State of Hawaiʻi Dept. Of Land and Natural Resources Division of Forestry and Wildlife, San Diego Zoo Global, and the U.S. Fish and Wildlife Service.