As the ʻAlalā return to their native habitat it is critical that land managers, scientists, and community members work together as “ʻAlalā Ambassadors” ensuring that the birds have the space, environment, and support they need to thrive.

The release efforts conducted from 2016-2019 occurred in the Puʻu Makaʻala Natural Area Reserve on Hawaiʻi Island.

Puʻu Makaʻala Natural Area Reserve has been managed for many years to promote native forests, is fenced and free of ungulates (cows, pigs, sheep, etc.), has a dense understory, and lots of ʻAlalā food plants.

At this point, the next release area is still to be determined. To help meet the evolving needs of the project and the birds, the ʻAlalā Project is working on reintroduction plans for releasing ʻAlalā within Maui Nui. 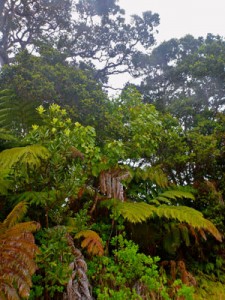 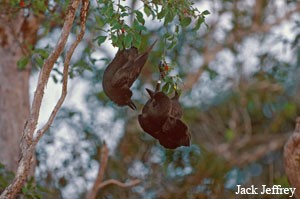 A successful reintroduction will require: 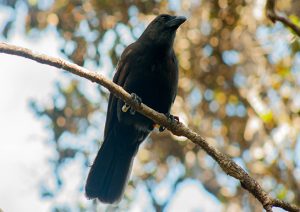 No kākou ke kuleana. The responsibility lies with each and every one of us to make sure that the ʻAlalā will be welcomed home to our Hawaiian forests once again. We must build community-wide support from our keiki to kūpuna.

Release Details
Releases are anticipated to occur for at least five years once they begin.

An average of 15 offspring per year can be produced in captivity, which means there will be a sustainable source of birds for release.

The birds all will be hatched out several months before the release. They will be transferred to the release aviary at about 6 months old and released at about 1 year of age.

The birds will be held in a large flight aviary at the release site before release. This is called a soft release, as they will have time to get used to their new home environment. While in the aviary, they will be cared for, fed, and monitored by project staff. After release, they will continue to get supplemental feeding and close monitoring. The area around the release site will have intensive predator control.

ʻAlalā will be trained before they are released to recognize ‘Io as predators and to respond appropriately by taking evasive action, such as seeking shelter in dense understory vegetation.