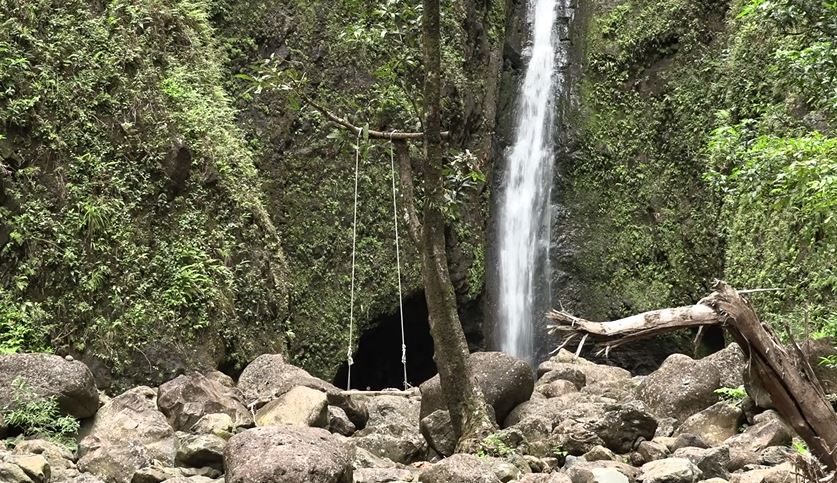 (Hau‘ula, O‘ahu) – For more than two decades, Sacred Falls State Park has been closed, as the result of a 1999 rockfall that injured scores of people and killed eight. Yet, largely fueled by social and travel media postings, people regularly trespass into the area.

On Wednesday, a trio of DLNR Division of Conservation and Resources Enforcement Officers (DOCARE), addressed one of the most egregious social media postings, by removing a wooden swing, strung from the only remaining tree, at the foot of the 80-foot-high waterfall.

Officers say it appeared sometime earlier this year. Large boulders circling the base of the swing did not magically appear but fell from above.

DOCARE Chief Jason Redulla said, “Despite our earnest efforts to ask people to delete images of the swing on their social media pages, some influencers continue to encourage others to do stupid things that could get them killed or seriously hurt by following their posts”.

Yesterday, the three DOCARE officers say it’s always eerie to hike to the waterfall, possibly because they are all fully aware of what happened more than 20-years ago.

“We don’t have the luxury of putting officers here every day,” said DOCARE Officer Edward Thompson. The 30-year-old Thompson is of the age group which seems to be responsible for most of the postings, so he understands the motivation to get likes, clicks, and friends.

“We understand wanting to post cool and exciting adventures on Instagram or Facebook, but people need to ask themselves, is it worth the risk? Apart from being cited or arrested, falling rocks, even small ones, can seriously hurt or kill someone, as history has shown. Sacred Falls, or Kaliuwa‘a, is significant to Hawaiians and it is disrespectful for people to ignore multiple warning signs and years and years of reminders that the area is closed.”

Part of the messaging shared by DLNR and its Division of State Parks, over the years and included as a QRC-accessible video on signs at and beyond the locked gates, asks potential violators to consider not only themselves, but the first responders who risk their own lives to rescue them in the event of an emergency.

Thompson, a second-year DOCARE officer, teamed up with fellow officers to remove the swing. Climbing first on the shoulders of Officer Kai Kamauu, Thompson shimmied up the tree to cut the line and ropes holding the swing in place.

“It’s important for locals and visitors to understand that there is natural and cultural significance to these places. We’re not doing this to prevent people from enjoying our wonderful natural and cultural resources, but to get people to understand the significance of these places to Native Hawaiians as a point of ancestry. That consideration, along with the risks to themselves and others is what we want people to really think about before they come here illegally,” Thompson said.

Chief Redulla concluded, “When we have asked social media posters to take down Sacred Falls information, some simply delete our requests. Others acknowledge the park is closed but tell readers and viewers, it’s worth the risk. It’s this entitlement mentality that we’re trying to penetrate, unfortunately without universal success.” DOCARE is using social media postings to identify people who are entering the park illegally and to potentially issue them citations.

During the swing-removal operation, one woman was cited by an officer for being in a closed area. When she was contacted, she was leading ten young people on a hike to the waterfall and the danger zone.