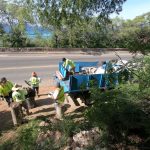 (HONOLULU) – More than 30 camps on both sides of Diamond Head are being cleaned-up this week. The clean-up at Diamond Head is part of a larger statewide coordinated effort to manage threats to natural and cultural resources on State lands and parks under DLNR jurisdiction.

04/01/21-DEPARTMENT OF LAND AND NATURAL RESOURCES STATEMENT RELATING TO THE MATTER OF WYATT J.K. KAM VS CARLTON HELM AND ROBERT FARRELL

(HONOLULU) - On March 19, U.S. Magistrate Judge Kenneth J. Mansfield issued a judgment in favor of DLNR Division of Conservation and Resources Enforcement (DOCARE) former Chief Robert Farrell and Lieutenant Carlton Helm, and against Plaintiff Wyatt Kam. The Court concluded that DOCARE’s response during the 2017 Independence Day “Floatilla” event in boarding the vessel Wind Warrior to address safety concerns including high seas, reports of an affray aboard, and the extensive use of alcohol by adults and underage participants was reasonable.

(HONOLULU) – Pu‘u Ola‘i (Little) Beach, at Mākena State Park on Maui’s south shore, will reopen tomorrow (Saturday, March 13) after being closed for several months.   Officials from the DLNR Division of State Parks and Division of Conservation and Resources Enforcement (DOCARE) spent the closure time developing a plan for the popular beach section that focuses on enjoyment for all park users and enhanced management and protection of  cultural resources. 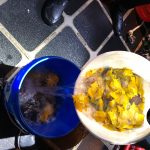 (HONOLULU) – Today, the Board of Land and Natural Resources (BLNR) voted unanimously to fine two Hawai‘i island aquarium fishers $272,000 in civil fines for multiple violations of Hawai‘i Administrative Rules (HAR) related to an illegal aquarium fishing incident in Kona in 2020.

(Waimānalo) – Just after dawn, two officers from the DLNR Division of Conservation and Resources Enforcement (DOCARE) drove around the 16-acre former site of the Dragon Garden-Hawai‘i Bonsai Cultural Center in the back of the valley in Waimānalo. They entered numerous structures to make sure there were no squatters, in advance of an enormous clean-up of the property.

(HONOLULU) – Earlier this week, the families of native Hawaiians buried at Polihale on Kaua‘i, issued impassioned pleas for people to be respectful and to follow rules and laws designed to protect natural and cultural resources, and all park users.

(HONOLULU) – It’s believed drowning is the likely cause of death of at least two of three Hawaiian monk seals found dead on Kaua‘i last September, November, and December.   Constraints caused by the COVID-19 pandemic delayed completion of post-mortem examinations. 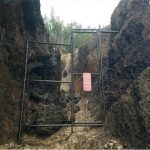 (HONOLULU) – Authorities are searching for the person or people who cut through metal gate poles and fencing at the “entrance” to Pu‘u Ola‘i (Little Beach) at Makena State Park on Maui. The beach section was closed on Jan. 5 in an effort to stop Sunday evening large gatherings (drum circles) attended by hundreds of people. 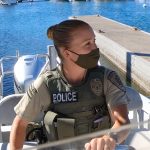 (HONOLULU) – Conservation Resource Enforcement Officers (CREOs) Kelly Woods and Edward Thompson, along with ten others with no background in law enforcement, graduated from the first DLNR Division of Conservation and Resources Enforcement (DOCARE) Academy last July.