With the advent of modern shipping, ecosystems once separated by natural barriers are connected by the ships and boats that move between them. The breakdown of this barrier has led to the introduction and spread of aquatic organisms into new locations. In the absence of predators and other controls, these organisms have the potential to become invasive. Invasive species cause a range of negative impacts on the environment, economy, human health, and social/cultural values.

The State of Hawaiʻi currently possesses the highest number of established aquatic non-native species among the fifty US States, upwards of 350; it is estimated that nearly 80% of these established species have been inadvertently introduced through internal (ballast water) and external (biofouling) areas of a vessel. Non-native species have been known to smother coral, sting or spread diseases among ocean goers, and hinder important industries including fisheries, tourism, and shipping. While not all introduced species are considered invasive, it only takes one invasive species to devastate an entire ecosystem. The Ballast Water and Biofouling Biosecurity Program prides itself on addressing these top two vectors of species introductions to preserve and protect the native aquatic Hawaiian ecosystems while minimizing biosecurity threats through an alliance with the local, national and international maritime industry, government, stakeholders, and the community. 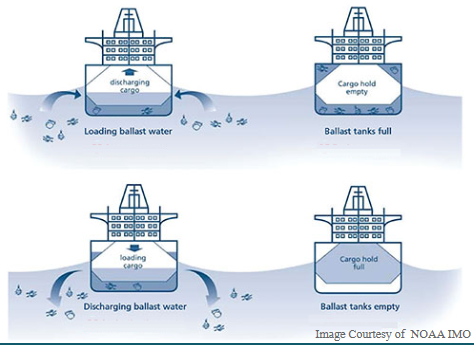 For managing ship stability, harbor water (“potentially” containing organisms and pathogens) is typically pumped into ballast tanks onboard a vessel during cargo offloading operations and discharged during cargo loading operations. If these organisms and diseases are unmanaged prior to being discharged in a foreign port, they can establish themselves in the new environment. Thankfully, these introductions can be avoided by using ballast water management techniques approved by the USCG and adhering to the Hawaiʻi Administrative Rules Ch.13-76 pertaining to ballast water discharge compliance.

WHAT DO WE DO?

To manage the invasive species risks associated with ballast water and biofouling, the Department of Land and Natural Resources (DLNR) was given authority by the Legislature to establish an Alien Aquatic Organism Stakeholders (AAOS). AAOS has representatives from the maritime industry, boating groups, state and federal governments, conservation groups and the scientific community. The DLNR also has a dedicated department to address aquatic biosecurity issues related to ballast water and biofouling. The Ballast Water and Biofouling department address these issues through: