Ballast water is water taken up or released by a ship to provide stability. 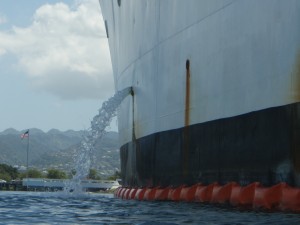 It is usually taken into ballast tanks when cargo is being offloaded, and discharged when cargo is being loaded. Ballast water quantities are adjusted on the open ocean to compensate for weather, fuel consumption, and for the overall safety of the ship and crew. When ships take in water for ballast in port, they also take in whatever organisms are present in the water. These organisms are then transported, and are potentially introduced into the waters of the ports along the vessels’ routes as ballast tanks are emptied each time cargo is loaded. The problem is that the ability of modern ships to cover long distances in a short amount of time provides a means for non-native marine species, including algae, invertebrates, and pathogens, to arrive in Hawaii via ballast water.

It is well documented that ballast water is a major pathway for aquatic species introductions around the world. Once aquatic invasive species are introduced it is both difficult and expensive to control. Complete eradication is probably impossible and the cost associated with it is significant. The best way to address these introductions is prevention.

Ballast water has been studied extensively world-wide, and numerous invasive species are attributed to this mode of introduction. Examples include zebra mussels in the Great Lakes and their negative impacts on commercial and recreational fisheries and damages to city water supplies; dinoflagellates causing red tides and fish kills in Australia and elsewhere; cholera bacteria causing epidemics in South America; and green crabs destroying mollusk and crustacean populations in areas it has invaded.

Here in Hawaii, Snowflake coral (Carijoa riisei) is believed to have been transported as larvae in ship ballast water or on the bottom of a ship as hull fouling. It was first discovered in Hawaii in 1972 at Pearl Harbor, and has since spread to all the Main Hawaii Islands. It grows well on artificial surfaces such as metal, concrete, plastic, rope and many other surfaces. It is a highly successful invasive species and threatens Hawaii’s biodiversity by monopolizing food and space resources and by displacing native species. It has been observed growing on and smothering black coral colonies at an astonishing rate. It has a planktonic larval stage that facilitates dispersal via ocean currents, giving it the ability to spread over a wide area. It appears to have no significant predators in Hawaii.

In 2000, the State’s Department of Land and Natural Resources was designated the lead agency for prevention and eradication of alien aquatic organism introductions via ballast water and hull fouling. New rules were developed with extensive discussions and consultation from the Alien Aquatic Organism Task Force (AAOTF). The AAOTF includes members representing Federal and State agencies, private shipping and boating industries, environmental organizations, and the scientific community. A public hearing for the proposed rules was held on June 28, 2007 and the Board of Land and Natural Resources approval them on August 10, 2007.

On October 12, 2007, new rules were adopted to manage ballast water discharge from vessels operating in Hawaiian waters. The rules are intended to minimize introduction and spread of non-indigenous aquatic organisms into waters surrounding the Hawaiian Islands.

The rules require vessels that carry ballast water to:

Ballast Water Reporting. The Ballast Water Reporting Form, developed by the US Coast Guard, can be downloaded from the National Ballast Information Clearinghouse. The form must be completed and submitted to the department no later than 24 hours prior to vessel arrival into state marine waters. Forms can be emailed to [email protected] or faxed to 808-587-0115.

International Maritime Organization (IMO) Guidelines D-2 Regulations for BW Management System Performance Standards specify the number of viable cells per microorganism category permitted in ballast water discharge (Table 1). Currently, the 10-50 μm size class are enumerated using epifluorescence microscopy to determine compliance. However, this method requires technically trained staff, long hours of enumeration, and expensive, bulky instrumentation and would be unfeasible to perform during routine BW compliance monitoring inspections. DLNR conducted an investigation into a new technology by Turner Designs, the Ballast Check 2 (BC2), which is purported to simplify BW discharge compliance monitoring for the 10-50 μm size class. The technology utilizes phytoplankton fluorescence as a proxy for cell viability and concentration. See further information about mechanism and theory behind the BC2. BC2 Data and results from the BC2 investigation are provided in this summary (in development).