Marine debris consists of man-made objects cast adrift in the ocean, either washed into the water from land-based sources or discarded from vessels at sea.  In Hawaiʻi, marine debris drifts into our waters and comes ashore all year, every year, and, unfortunately, there has been marine debris in our oceans for as long as there have been people to create it with no end in sight.  Marine debris of any size poses a threat to the health and safety of the human population as well as birds, all marine species, and the fringing coral reef that protects our shorelines from erosion. 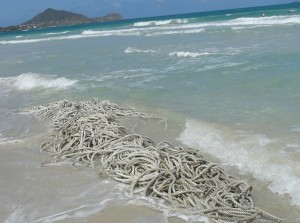 The threat of aquatic invasive species (AIS) is a constant concern on both land and sea.  Materials placed into the ocean for a long period of time will often acquire some sort of biofouling, or growth of marine organisms.  For items that wash into the ocean from land and then are colonized by common open ocean (pelagic) species such as gooseneck barnacles, these are not a concern should they drift into Hawaiian waters.  However, marine debris arriving in Hawaiʻi that had already acquired local biofouling at its point of origin before being cast adrift in the ocean is of great concern.  The threat of alien species being introduced to Hawaiʻi is no small thing.  Alien species, once introduced, can become established and threaten native ecosystems, and even drive native species to extinction.  Therefore, if marine debris with biofouling is found, it should be reported as soon as possible to DLNR so that a biologist specializing in AIS identification can inspect and, if necessary, dispose of the organisms. For an informational flyer on aquatic invasive species and Japan tsunami marine debris visit this Q&A.

On March 11, 2011, a 9.0 earthquake triggering a 23 foot tsunami devastated Honshu, Japan, claiming nearly 16,000 lives, injuring about 6,000 people, leaving close to 4,000 people missing, and destroying cities and rural areas alike. As a result, millions of tons of debris were washed into the ocean. Debris from terrestrial to coastal areas are now floating in the open ocean along the North Pacific Current. Many pieces of debris will become colonized by marine organisms in the open ocean. The concern is not new marine organisms colonizing but pre-tsunami established organisms on vessels, docks, buoys, and other buoyant objects. These organisms are highly likely to become invasive pests in other parts of the world as debris begins washing ashore. These established organisms are likely Asian species not native to any surrounding waters.

With recent incidences of Japanese tsunami debris washing ashore, Hawaiʻi Department of Land and Natural Resources, NOAA, University of Hawaiʻi, as well as other partners developed an action plan to deal with the potential for invasive species introduction into Hawaiʻi. Workshops have been held along the west coast of the United States, Hawaiʻi, and Canada to discuss what to do when invasive species reach the shores. 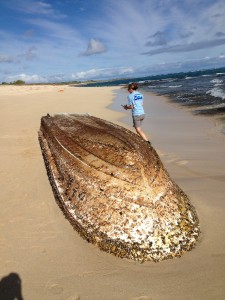