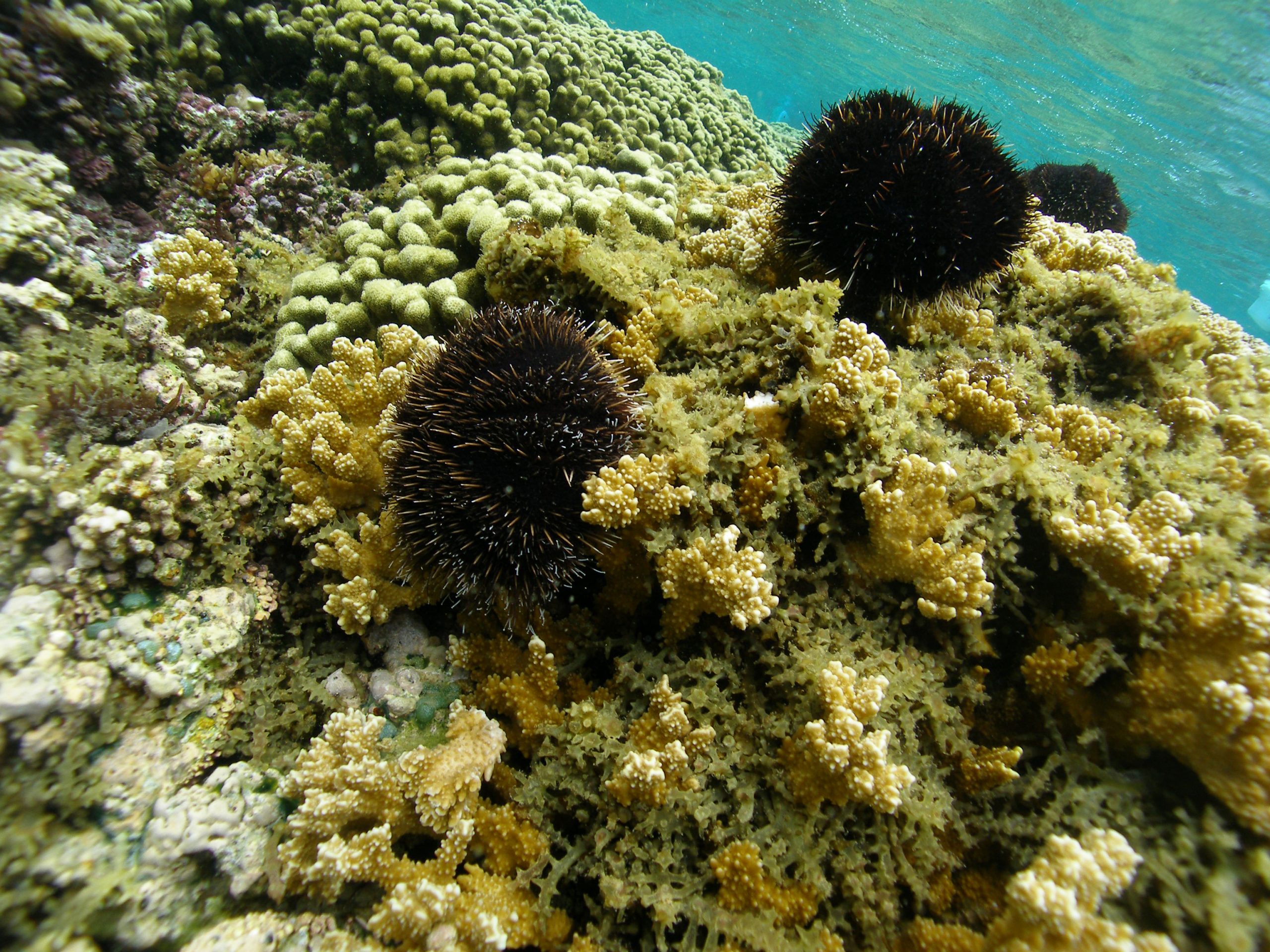 The key to maintaining low levels of invasive algae is the presence of native herbivores.  The DAR Sea Urchin Hatchery at the Ānuenue Fisheries Research Center spawns and raises native Hawaiian collector urchins (Tripneustes gratilla) as a tool to fight invasive alien seaweeds in Hawai‘i.  In most situations, the invasive seaweed is removed by hand or by mechanical means from the troubled areas.  But without a strong population of native herbivores, like Hawaiian collector urchins, the seaweed will grow back.

DAR actively removes invasive algae from affected ecosystems and then maintains low levels of invasive algae by placing these farm-raised urchins onto reefs. They nibble away at the invasive seaweed as it starts to regrow, like underwater gardeners pulling weeds, or like goats eating away on unwanted brush.  Without invasive algae to compete with for space and light, corals are able to thrive.

Once a month, divers collect approximately 20 wild adult urchins from various locations across the south shore of O‘ahu. Once collected, they are returned to Ānuenue Fisheries Research Center where staff eagerly await their arrival.  Staff then gently agitate the urchins to get them to spawn and release their gametes into plastic containers.

Once the gametes are collected, they are combined together and placed into large cylinder tanks.  Because the urchin larvae are free-swimming, they must constantly be suspended in the water column.  The larvae will live in these tanks eating to their heart’s content on phytoplankton, and go through a variety of growth stages that take approximately three weeks.

After approximately three weeks, the larvae eventually settle and take the shape of a true urchin.  Because they are still very tiny (ranging from the tip of a pencil to a thumbtack), their mouths are very small. This allows the larvae to feed on the biofilm that naturally grows inside the tanks for 1-2 months.  As the urchins start to grow and their mouths get larger, they eventually transition over to macro-algae.  At this stage they really start to grow quickly!

After approximately 4-5 months the urchins are large enough (about the size of a quarter) to be handled and transplanted to their new homes on the reef.  Once released, they quickly go into hiding. Juvenile urchins munch away on the invasive algae, and soon grow too large to hide in holes on the reef. Eventually, the urchins emerge and spend the rest of their days slowly moving across the reef in search of their next meal.

The very first cohort of urchins was released into Kāne‘ohe Bay in January 2011. Since then, the Urchin Hatchery has released 600,000 sea urchins across the State, treating more than 227 acres of reef in Kāneʻohe Bay, and has expanded to the Waikīkī Marine Life Conservation District.

Voice of the Sea is a Hawai‘i Sea Grant program that highlights research, science, and cultural practices throughout Hawai‘i and the Pacific. In this Episode, watch Urchin Hatchery staff explain the importance of culturing sea urchins for algae management in Hawai‘i.