The Commission on Water Resource Management consists of seven members, five of whom are appointed by the governor and confirmed by the State Senate. The remaining two are the Chairperson of the State Board of Land and Natural Resources, who serves as Chairperson of the Water Commission, and the Director of the State Department of Health. The members are unpaid and serve a limited term. Click here to learn more about our logo and motto, “Ke Kahuwai Pono.”

Dr. Elizabeth “Libby” Char is serving as interim director of the Department of Health. Dr. Char is an emergency physician and graduate of the University of Hawaiʻi, John A. Burns School of Medicine. After completing residency training in California, she returned to Hawaiʻi to the clinical practice of emergency medicine at The Queen’s Medical Center. She provided administrative oversight for the City and County of Honolulu EMS system for many years.

Dr. Char currently focuses her efforts on developing systems of care, training, protocols and emergency response utilizing best practices in the pre-hospital environment. She provides medical direction for several EMS, Fire, and Ocean Safety agencies across the state of Hawaiʻi and is the current chair of the State of Hawaiʻi EMS Advisory Committee.  As Department of Health Director, Dr. Char is an ex officio member of the Commission. Michael Buck has more than 25 years of experience with the Department of Land and Natural Resources. In addition to serving as the administrator for the Division of Forestry and Wildlife from 1989 to 2004, he has also held positions as a state forester and coordinator for the Natural Area Reserves. After graduating from the University of Florida with a Masters in Forest Resources Conservation, Michael secured a range of professional accomplishments including, drafting and leading multi-constituent support for the passage of major Federal (Hawaii Tropical Forest Recovery Act) and State (Forest Stewardship Act, Natural Area Partnership Program, Endangered Species Recovery Act, Invasive Species Council) legislation, helping to establish Hawaii’s Watershed Partnership Program, and developing management plans and operational capacity for Hawaii’s Natural Area Reserves System.

Michael is a four time member of the U.S. delegation at the United Nations Forum on Forests and currently serves as the Sustainable Forests Representative for the National Association of State Foresters. He has a farm in Waimanalo where he presently lives and works as a farmer. This is his first term (August 27, 2019 – June 30, 2023) and second time serving with the Commission. 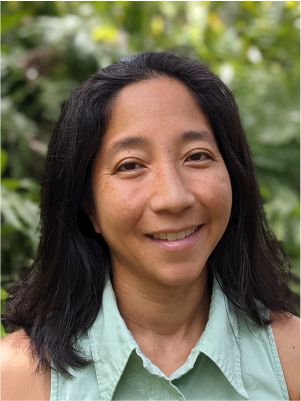 Aurora Kagawa-Viviani is a Ford fellow and postdoctoral researcher with the UH Hilo Hawaiʻi Cooperative Studies Unit, with joint affiliations with the UH Mānoa Water Resources Research Center and the US Geological Survey Pacific Island Ecosystems Research Center. Her educational training spans environmental engineering (MIT SB 2003), botany (UH Mānoa MS 2008) and geography (UH Mānoa PhD 2020). Raised in urban Honolulu and a graduate of Kamehameha Schools (Kapālama), she has spent significant time working in the conservation, in rural Hawaiʻi, and in public schools and the UH system, working to support and advance ʻāina-based and indigenous STEM education and research. Her work focuses on forest-water interactions, restoration ecohydrology, and cultivation of plants and landscapes where water limits growth, always with an attentiveness to human-ecosystem interactions, leaning on natural science and social science tools and approaches. This is her first term (July 1, 2021 – June 30, 2025) with the Commission. 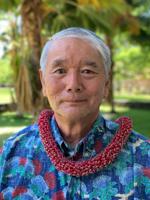 Wayne K. Katayama comes to the Commission with 40 years of experience in agricultural operations and marketing.  Mr. Katayama began his career with C. Brewer Properties working as an accountant on real estate development projects on the island of Hawai‘i.  He soon moved to the agriculture industry working for Olokele Sugar Company, C. Brewer & Company, Kīlauea Agronomics, and Hawaiian Fruit Specialties.  Mr. Katayama eventually went on to serve as the President and General Manager for Kaua‘i Coffee Company in ‘Ele‘ele, Kaua‘i, where he oversaw all aspects of coffee production, implemented dam inspections and emergency action plans for high risk reservoirs, and implemented pesticide management plans to reduce usage and drift.

Mr. Katayama holds a bachelor’s and a master’s degree in Business Administration from the University of Hawai‘i at Mānoa and is a retired Major in the Hawai‘i Air National Guard.  He has also served on numerous boards including the Kauai Planning Commission, Hawai‘i Employer’s Council, Mayor of Kauai Agricultural Advisory Committee, University of Hawai‘i College of Tropical Agriculture & Human Resources Advisory Committee, and the Agribusiness Development Corporation Board of Directors.  This is his second term (July 1, 2022 – June 30, 2026) with the Commission. 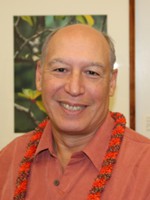 In 2016, Neil Hannahs concluded over 41 years of service to the Kamehameha Schools and launched Hoʻokele Strategies LLC, a consulting enterprise serving as an intermediary in developing and connecting inspiring social entrepreneurs with exceptional mentors and aligned impact investment capital.

From 2000 to 2015, he directed the Land Assets Division of Kamehameha Schools and was responsible for a portfolio of 358,000 acres of agriculture and conservation lands in Hawaiʻi and also founded the First Nations Futures Program and Hawaiʻi Investment Ready Program. The work of this division earned the Innovation Award of the Hawaiʻi Conservation Alliance, as well as the Kamaʻāina of the Year Award from the Historic Hawaiʻi Foundation.

Mr. Hannahs is a graduate of Kamehameha Schools and received BA and MA degrees from Stanford University.  He is actively engaged in community affairs. This is his second term (July 1, 2020 – June 30, 2024) with the Commission.

For 23 years, from 1982 to 2005, Paul Meyer was the Executive Vice President of Finance and Administration for Maui Land and Pineapple Company, Inc. and its subsidiaries.  He was also a Director of all subsidiaries and among other things managed the operations of the company’s watershed conservation efforts, its public utility companies Kapalua Water and Kapalua Waste Treatment, its private and semi-private surface water systems including the Honolua Ditch and the Kalili (Opana/Awalua) system as well as irrigation systems and punawais that serviced approximately 14,000 cultivated acres. He worked closely with other landowners, farmers and Maui water utilities on community and water related issues.

From 2005 to 2010 – Mr. Meyer was a Principal with Meyer Associates, LLC. In that capacity he worked with a number of clients including three years with Onstor Corporation located in California.  In 2011 Mr. Meyer was the Deputy Director for the County of Maui, Department of Water Supply and resigned and retired from the County of Maui in January of 2017.  He now resides in Upcountry Maui with wife Rosalyn.  This is his second term (July 1, 2021 to June 30, 2025) with the Commission.

The State Water Code declares that the Chairperson of the Board of Land and Natural Resources shall serve as the Chairperson of the Commission, while the Director of Health shall serve as an ex-officio voting member. The other five members of the Commission are to be appointed by the Governor, subject to confirmation by the Senate. Each member must have substantial experience in the area of water resource management.

Following a solicitation of applications, a list of at least three individuals is sent to the Governor for each open position. Once appointed, the members of the Commission serve without compensation, but are reimbursed for expenses, including travel expenses, necessary for the performance of their duties. The tenure of each Commission member is subject to the provisions of §26-34, Hawaii Revised Statutes, which are summarized as follows:

The Nominating Committee for the Commission on Water Resource Management is convened whenever there is a pending vacancy.  For more information on the process, read the Selection & Terms section above.

There is currently one (1) pending vacancy on the Commission.

The current nominating committee is comprised of the following individuals:

Listed below are the notices and agendas related to the current nominating committee.

The State, as trustee of water resources, has the constitutionally-mandated responsibility to set policies, protect resources, defines uses, establish priorities while assuring rights and uses, and establish regulatory procedures. The Commission on Water Resource Management (Commission) is the entity fulfilling this responsibility through administration of the State Water Code, Chapter 174C, Hawaii Revised Statutes, which was adopted by the legislature in 1987. Operating procedures are governed by administrative rules, which are Chapters 167 to 171, Hawaii Administrative Rules.

The Commission has jurisdiction over land-based surface water and ground water resources, but not coastal waters. The protection and management of these water resources is carried out through resource assessments, planning, and regulation. Generally, the Commission is responsible for addressing water quantity issues, while water quality issues are under the purview of the State Department of Health.

The Commission has regularly scheduled meetings, but on its own motion or on petition or application of any interested person or persons or an agency of the state or county government hold proceedings as necessary from time to time for the purpose of:

For specific reference to the role of the Commission, please see the Hawaii Administrative Rules, §13-167-22, Proceedings before the Commission.

Prior to the end of a Commissioner’s term, the Commission’s selection process, as described above, is initiated. A Nominating Committee is formed and a statewide public notice is issued to solicit nominations. At that time, an application form will be made available here and interested applicants will need to submit their resumes and applications to the Nominating Committee by a deadline date specified in the public notice.  Please visit the State of Hawaii Boards and Commission website below for more information on how to apply.

Most links throughout this website will either open an Acrobat PDF file or will link to a page within this site. Exceptions to these are indicated by the symbols below.