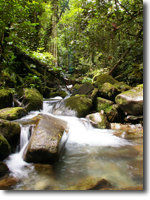 Under the State Water Code (Code), Chapter 174C, Hawaii Revised Statutes (HRS), the Commission on Water Resource Management (Commission) has the responsibility of establishing IFS on a stream-by-stream basis whenever necessary to protect the public interest in the waters of the State. Early in its history, the Commission recognized the complexity of establishing IFS for the State’s estimated 376 perennial streams and instead set interim IFS at “status quo” levels. These interim IFS were defined as the amount of water flowing in each stream (with consideration for the natural variability in stream flow and conditions) at the time the administrative rules governing them were adopted in 1988 and 1989. 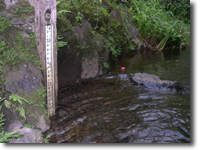 The Hawaii Supreme Court, upon reviewing the Waiahole Ditch Contested Case Decision and Order, held that such “status quo” interim IFS were not adequate to protect streams and required the Commission to take immediate steps to assess stream flow characteristics and develop quantitative interim IFS for affected Windward Oahu streams, as well as other streams statewide. The Hawaii Supreme Court also emphasized that “instream flow standards serve as the primary mechanism by which the Commission is to discharge its duty to protect and promote the entire range of public trust purposes dependent upon instream flows.”

To the casual observer, IFS may appear relatively simple to establish upon a basic review of the Code provisions. However, the complex nature of IFS becomes apparent upon further review of the individual components that comprise surface water hydrology, instream uses, noninstream uses, and their interrelationships. The Commission has the distinct responsibility of weighing competing uses for a limited resource in a legal realm that is continuing to evolve. The following illustration was developed to illustrate the wide range of information, in relation to hydrology, instream uses, and noninstream uses that should be addressed in conducting a comprehensive IFS assessment. 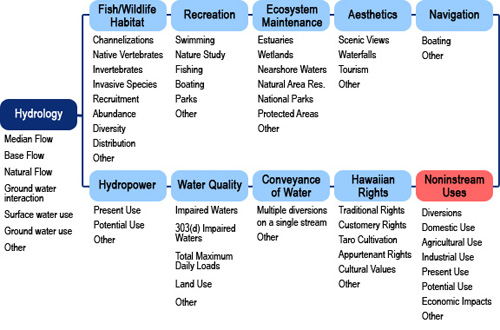 The Code provides for a process to amend an interim IFS in order to protect the public interest pending the establishment of a permanent IFS. The Code, at §174C-71(2), describes this process including the role of the Commission to “weigh the importance of the present or potential instream values with the importance of the present or potential uses of water for noninstream purposes, including the economic impact of restricting such uses.”

Recognizing the complexity of establishing measurable IFS, while cognizant of the Hawaii Supreme Court’s mandate to designate interim IFS based on best available information under the Waiahole Combined Contested Case, the Commission at its December 13, 2006 meeting authorized staff to initiate and conduct public fact gathering. Under this adopted process (reflected in the left column of figure below), the Commission staff will conduct a preliminary inventory of best available information upon receipt of a petition to amend an existing interim IFS. The Commission staff shall then seek agency review and comments on the compiled information (compiled in an Instream Flow Standard Assessment Report) in conjunction with issuing a public notice for a public fact gathering meeting. Shortly thereafter (generally within 30 days), the Commission staff will conduct a public fact gathering meeting in, or near, the hydrologic unit of interest. 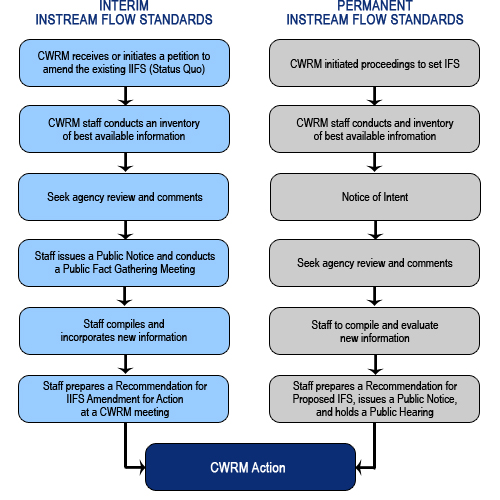 Click on each of the Island homepages below to explore the development of instream flow standards by region.

Most links throughout this website will either open an Acrobat PDF file or will link to a page within this site. Exceptions to these are indicated by the symbols below.