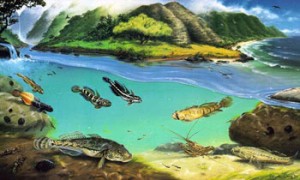 The Hawaiian Archipelago, situated in the middle of the Pacific Ocean, is the most isolated landmass in the world. The west coast of the U.S. is 2,400 miles away and Japan is 3,800 miles away. The islands range from Kanemiloha‘i (Kure Atoll) in the northwest to the island of Hawai‘i in the southeast, a span of 1,591 miles. The eight islands from Ni‘ihau to Hawai‘i, commonly known as the main Hawaiian islands, make up the lower one fourth (22.3%) of the archipelago but represents nearly 96% of the land mass. Only five of these islands (Kaua‘i, O‘ahu, Moloka‘i, Maui, and Hawai‘i) are high enough to capture the rain clouds brought to the islands by the prevailing NE trade winds, and for the resulting orographic (generated by the mountain) rainfall to generate streams. These 376 small, torrential mountain streams are located on the windward side of the islands and represents the freshwater ecosystem that is home to our native stream animals.

Hawaiian streams have the following characteristics:

The isolation of the Hawaiian Archipelago in the Pacific ocean has resulted in a sparse fish population but many are endemic (only found here) to the islands. There are only about 550 species of marine fishes, as compared to about 2,000 fish species in the Philippines. Hawaiian streams have only five native species of fishes (four endemic, one indigenous, i.e., native but found elsewhere too), two species of crustacean (all endemic) and three species of mollusk (all endemic).

The fishes consist of two closely related families, Gobiidae and Eleotridae, collectively referred to as ‘o‘opu in the Hawaiian language. These fishes are small, nearly scaleless bottom dwellers as adults. The fused pelvic fins, at least for the gobies, are particularly adapted to the rocky, steep, flashy-flow nature of Hawaiian streams. These highly muscular fins are used for maintaining position in areas of high flow, but most spectacularly, for climbing large waterfalls. One species, ‘o‘opu alamo‘o (Lentipes concolor), is known to migrate up the 420 feet high Akaka Falls on the Big Island.

The native crustaceans are represented by two species. The ‘ōpae kuahiwi, or mountain ‘ōpae, prefer the higher sections of the streams where there is abundant cool, clear and fast-flowing water. The other is the prawn, ‘ōpae ‘oeha‘a, and is most common in the lowest stream section in slow-flowing water.

There are three endemic species of river ‘opihi (limpets) but the most common is the larger hihiwai (Neritina granosa) which are active at night and are most common in the lower to mid stream sections. The other two species can mostly be found at the mouth of rivers.

Most native Hawaiian stream animals share a unique life cycle pattern, called amphidromy. This is a specialized pattern where the animals lives in two different environments (diadromy) during different life stages. The most common example are the salmon and eels, which are commonly given as examples in nature books and shows. Adults live in streams as adults. The gobies lay their eggs in the stream, and upon hatching, the larvae migrate downstream and are swept out to sea. After living in the ocean plankton community for a time, the postlarvae, called hinana, return to the adults habitat by migrating upstream, often climbing numerous waterfalls. Unlike the salmon, the gobies do not return to the streams that they were born in.

Maintaining the natural patterns of water flow in streams is the single most important requirement for protection of native Hawaiian stream animals. These natural flows will keep the river mouth open and provide the gateway for our precious native stream animals to complete their life cycle. Hawaiian native stream life, like the native Hawaiian people who depended on the streams, embody the connection of Mauka (mountain) to Makai (ocean) that defines the Hawaiian ecosystem.