LIHUE — High tech cameras placed at remote breeding sites are providing insight into the secret lives of Kauai’s endangered seabirds. As part of the Kauai Endangered Seabird Recovery Project (KESRP), which is a state and federally funded project under the state Department of Land and Natural Resources (DLNR) Division of Forestry and Wildlife, in collaboration with the University of Hawaii Pacific Cooperative Studies Unit, the 14 cameras were placed on Newell’s Shearwater and Hawaiian Petrel burrows during the breeding season last year to collect data on everything from the arrival of adults to the fledging of chicks.

“These cameras have provided us with a window into a side of the birds that we simply never see,” explained Dr. André Raine, KESRP coordinator. “Watching the birds returning to their burrows after a winter out at sea, preening each other at the burrow entrance or interacting with their chicks at night is really pretty special, but the cameras are also providing critical data to help save the birds from extinction.”

The cameras are set on a trigger mechanism to take photos when something passes in front of the burrow entrance. Once the cameras are triggered, they take a rapid series of photos and only stop when the movement has ceased. This means that the cameras record birds entering or leaving their nest sites, or chicks exercising in front of the burrows throughout the breeding season. As the birds only come into their colonies at night, cameras are fitted with infrared flashes so that the birds are not disturbed.

“We’ve recorded birds from the moment they arrive on Kauai in March to the time their chicks depart in October to December,” Dr. Raine continued. “The cameras are a great way to collect data on a whole range of behaviors, such as when the chicks fledge and how often adults come to the burrows to feed their offspring. In this way we are increasing our understanding of exactly what these birds are up to while they are on our island.”

The cameras have also highlighted the threat of invasive species to these endangered seabirds, a problem that is facing Hawaii’s endemic wildlife throughout the archipelago. Cameras have filmed burrows being visited by both feral cats and rats throughout the study period, and have even captured the gruesome moment when a chick was eaten alive by a large rat.

“One of the achievements of this work has been to highlight how vulnerable these birds are to introduced predators,” Dr. Raine said. “It doesn’t matter how remote the sites are, feral cats and rats are always present and these can have a dramatic impact on breeding colonies. The cameras showed that several of the burrows even had rat nests right at the burrow entrance and feral cats actively investigated burrows on multiple occasions.”

The collection of this type of data using the latest technology is important because Kaua’i holds 90 percent of the world’s population of the Newell’s Shearwater, making it vital for the global conservation of this species. The island also holds internationally important populations of the Hawaiian Petrel.  The data from these cameras is therefore invaluable in terms of guiding on-going introduced predator control efforts in remote montane colonies.

To see a selection of videos taken from these cameras, visit the newly launched Kauai Endangered Seabird Recovery Project website at https://kauaiseabirdproject.org/ 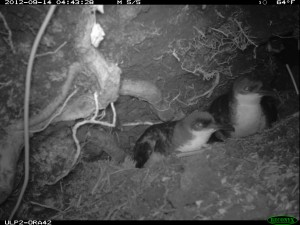 Photo of two Newell’s Shearwaters at their burrow taken with an infra-red camera. Photo by Kauai Endangered Seabird Recovery Project.

Background: The Kauai Endangered Seabird Recovery Project (KESRP) is a state and federally funded project under the DLNR Division of Forestry and Wildlife. The KESRP works closely with DOFAW to gather critically needed information on threatened and endangered seabird on Kauai. Species include the Newell’s shearwater (T), Hawaiian petrel (E) and candidate species the Band-rumped Storm-petrel. Their work includes auditory surveys in remote areas to locate colonies and assess their population sizes, radar surveys, and colony monitoring. Some KESRP work, such as the monitoring work outlined in this press release, is funded through the Kauai Island Utility Cooperative Short-term Habitat Conservation Plan.