HONOLULU—The interagency Hawaii Invasive Species Council (HISC), comprised of the directors or designees of the Department of Land and Natural Resources (DLNR), Department of Agriculture (DOA), Department of Health (DOH), Department of Transportation (DOT), Department of Business, Economic Development and Tourism (DBEDT), and the University of Hawaii (UH) has launched a new website highlighting the growing role the council plays in cabinet-level coordination on invasive species issues in Hawaii. The website, accessible directly at https://hisc.hawaii.gov or via the state’s upgraded hawaii.gov Web portal, places new emphasis on the actions of the HISC, including resolutions, funded research reports, and strategic plans.

“Collaboration across state departments has resulted in clear progress toward addressing the impacts of invasive species in the Islands,” Gov. Neil Abercrombie said. “The new HISC website, which is part of our state’s effort to expand the use of hawaii.gov as a resource for user-friendly information about government programs and services, provides greater opportunity for the public to join in this effort by learning more about what each and every one of us can do to protect Hawaii.”

The HISC was created in 2003, when the Hawaii State Legislature declared invasive species “the single greatest threat to Hawaii’s economy and natural environment and to the health and lifestyle of Hawaii’s people.” The HISC’s statutory authority mandates identification of state funds available for invasive species prevention, control, outreach and research, and requires the HISC to coordinate the state’s position on invasive species issues and provide advice to the Governor and Legislature. Since its inception, the HISC has approved more than $25 million in funding for qualified projects to help keep invasive plants, like miconia, and invasive animals, like the stinging little fire ant, from spreading throughout the state. The HISC’s new website better details how these funds have been spent, making final project reports and research results available for the entire 8-year history of the organization.

The HISC has made progress under the Abercrombie Administration, with the direction of council co-chairs Russell Kokubun (DOA) and William Aila (DLNR) and engagement by Gary Gill (DOH), Jesse Souki (DBEDT), Dr. Maria Gallo (UH), and David Rodriguez (DOT). Since the induction of new council leadership in June 2011, this HISC has:

The HISC has committed to providing more public education by utilizing its new website as a one stop shop for information on high-profile invasive species in Hawaii, recent news regarding invasive species, and detailed reports for all projects funded via the HISC. The council is also supporting the development of coordinated interagency response plans to enhance efficacy of statewide detection and response capabilities. Other priorities for the council include better state and federal coordination on invasive species issues, support for biocontrol research, and response to invasive species on marine debris from the 2011 Japanese tsunami.

“Because invasive species have such a detrimental effect on critical things like our water and food security, we are committed to working across departments on this important issue,” said HISC Co-Chair William J. Aila, Jr. “But we also need the public’s help, especially in spotting pests like snakes and other plants and animals that don’t belong in Hawaii. The new HISC website provides information on how to report a pest by phone or online.” 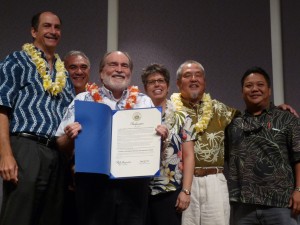 The Hawaii Invasive Species Council (HISC) is a cabinet-level interagency collaboration mandated by Chapter 194, Hawaii Revised Statutes. It is co-chaired by the Department of Land and Natural Resources and the Department of Agriculture with additional voting members from the Departments of Health; Transportation; and Business, Economic Development and Tourism; as well as the University of Hawaii. The HISC approves an annual budget to support invasive species prevention, control, and public outreach projects across the state.