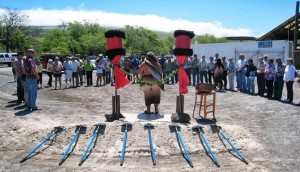 KAILUA-KONA, HAWAII — The Department of Land and Natural Resources (DLNR) Division of Boating and Ocean Recreation today heldp a ceremonial ground breaking, attended by boaters and other members of the public,  for the long-awaited Kawaihae Small Boat Harbor (South) Improvements Phase 1 project.

The ceremony took place this morning at Kawaihae South Small Boat Harbor, in Kawaihae, Hawaii Island. Construction is expected to begin later in June and be completed by April 2014.

The Kawaihae Small Boat Harbor (South) is located adjacent to the Kawaihae Deep Draft Harbor. It was dredged in the 1970s, and the breakwater structures were completed in the late 1990s by the Army Corps of Engineers for use as a small boat harbor. The harbor has sat relatively unused since then.

The project was delayed over 4-1/2 years while DLNR obtained a Department of Army Permit for in-water construction.

This permit was initially submitted to the Army Corps of Engineer’s Regulatory Branch on August 7, 2008, and was subsequently revised to delete the boat ramp and two loading docks, due to issues regarding coral removal and mitigation.

At the request of the federal regulatory agencies and the Army Corps of Engineers, DLNR has completed numerous studies and made revisions to the project design to mitigate damage to corals and impacts to Endangered/listed species. These include three Marine Biological Surveys, a Draft Biological Evaluation Report, draft and final Coral Transplantation Plans, and physical removal and relocation of corals.

The Department of Army Permit (Letter of Permission) was finally issued on March 21, 2013. A partial Notice to Proceed for ordering/purchasing of materials was issued on April 9, 2013.

Phase 2 of improvements, still in the design phase, will include construction of a 3,600-foot long paved access roadway and 3,400 feet of new water mains with fire hydrants and service laterals.  Act 106, SLH 2012 appropriated $2,300,000 for this project. 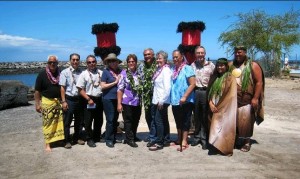