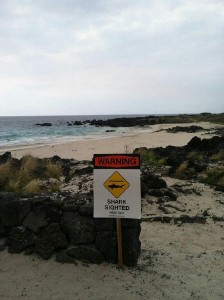 KAILUA-KONA, HAWAII — The Department of Land and Natural Resources (DLNR) this afternoon closed Mahaiula and Kua Bay sections of Kekaha Kai State Park due to a shark incident earlier today. The park is located 2.6 miles north of Keahole airport in Kailua-Kona.

At about 12:55 p.m., the victim, a 28-year-old male from Kailua-Kona, was swimming in waters off of Mahaiula Beach when he was bit by a shark.

The Hawaii County Fire Department responded and transported him via medevac helicopter to North Kona Community Hospital for treatment.

The helicopter overflight also revealed what appeared to be a large tiger shark in the vicinity of the location where the victim was attacked.

Closure of these two bays will continue until at least noon Wednesday, following a flyover by Hawaii County Fire Department helicopter to assess offshore waters for any presence of sharks.