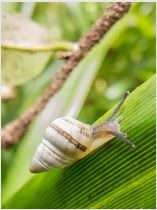 HONOLULU — In the remoteness of O‘ahu’s forested wilderness there is magnificent beauty in many forms, shapes, and sizes. Hawaiian tree snails in the genus Achatinella, endemic to the island of O‘ahu, are a diverse assemblage of small, colorful species found deep in the Ko‘olau and Wai‘anae mountains.

These snails were once abundant, and stories of their “singing” frequent Hawaiian legend. Colors spiral up their shells from soft grey and pale yellow to bold orange, mossy green, earthen brown, and crisp white, the shades twist in a seemingly infinite spiral up their fragile cones. There were once 41 species of Achatinella. Sadly only ten species are known to exist today. Nearly all remaining species are declining due to predation by introduced species, yet another reminder of the fragility of Hawaii’s native ecosystems.

The Department of Land and Natural Resources’ Division of Forestry and Wildlife, Snail Extinction Prevention Program (SEPP), with support from its partners in conservation, are working to reverse these trends.

For the species Achatinella concavospira, now only occurring at several locations within the Honouliuli Forest Reserve, time is of the essence. In early 2013 one of the last known populations was rapidly declining due to disastrous levels of predation by rats. SEPP staff, with help from the Oahu Army Natural Resource Program, The Natural Area Reserve System, The US Fish and Wildlife Service, and the University of Hawaii Hawaiian Tree Snail Conservation Lab, took a proactive step.

Concerned that this population’s existence was in imminent threat of extinction, the conservationists, in a collaborative effort, extracted the entire snail population of 24 snails, into the University of Hawaii Hawaiian Tree Snail Conservation Lab, until they could be safely returned to protected habitat.

“Protecting threatened and endangered species through collaborative approaches like this one builds the collective capacity of resource managers to understand the scope of challenges facing Hawaii’s rare species and leverages our finances to facilitate greater impact on the ground,” said William J. Aila Jr., DLNR Chairperson. “The Snail Extinction Prevention Program (SEPP) is a new program under the DLNR. In their work, SEPP and partners honor what is today a rarely seen species and protect not only our natural resources, but our culture.”

On Monday July 8, 2013 all 24 snails extracted were returned to protected habitat deep within the Honouliuli Forest Reserve. These snails now reside inside a newly constructed exclosure structure, which consists of a metal fence and four predator exclusion devices designed to keep out rats, the cannibal rosy wolf snail and chameleons. The location of their residence is approximately 1,200 meters from the snail’s original home, and currently protects two other species of rare endemic snails. This population will be intensively monitored by SEPP, with future genetic studies planned to assess potential introductions of individuals from other remaining populations of Achatinella concavospira.

Follow the story of the snails’ translocation on DLNR’s Facebook page and website. When you hike up mauka on Oahu take a gentle look under tree leaves for these colorful little forest gems. Maybe, if you are lucky, you will hear them sing.