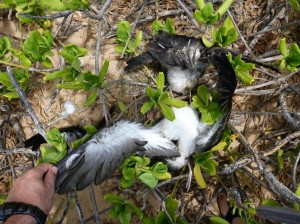 LIHU‘E – A large colony of Hawaiian ‘ua‘u kani (wedge-tailed shearwaters) located along a coastal path on the south shore of Kaua‘i has been decimated in two attacks this summer by dogs and feral cats.

Recently, several more freshly killed birds were found in the area, suggesting that the colony is still being hit hard by dogs and cats. At the same time state biologists searching wedge-tailed shearwater burrows in the area known to have been active this year, found that the burrows were now abandoned, many with dead eggs inside.

Earlier, in July and August, more than 80 of the native seabirds (many of them actively breeding) have been found slaughtered in their nesting area. Injuries sustained by the birds showed that they were killed by dogs and feral cats.

“It appears that the entire colony in this area has been severely depleted, and it is likely that very few breeding birds now remain,” said Thomas Kaiakapu, Kaua‘i wildlife manager for the state Department of Land and Natural Resources (DLNR) Division of Forestry and Wildlife (DOFAW).

The wedge-tailed shearwater, also known as “matori” to local fishermen, is one of the more familiar seabirds on Kaua‘i, with large concentrations of the birds seen off shore in the late afternoon as they gather to return to nest sites at night. At this time of year, the birds are either sitting on eggs or raising very small chicks, making them particularly vulnerable to dogs and cats.

“Large feeding flocks of matori, or ‘ua‘u kani, help fishermen to locate feeding schools of tuna,” said William J. Aila, Jr., DLNR chairperson. “The birds use tuna to drive their prey (small fish and squid) to the surface where they can catch them. We ask that fishermen speak to their neighbors about keeping their dogs and cats under control so that these important friends to fishermen can survive.”

“There are signs placed along the south coast path asking dog owners to keep their dogs on leashes and their cats indoors. No matter how friendly or docile you think your dog may be, if it gets near a nesting seabird the dog will kill it – it’s as simple as that. We ask the general public to act responsibly in these areas with their pets to prevent similar instances from happening again.”

“While this large kill of shearwaters is particularly alarming, we unfortunately get reports of mass kills of this species every year on the island,” said Kaiakapu. “As these birds breed in dense colonies along the coast, they are particularly vulnerable to dogs that have been let off of their leashes or feral cat colonies located near the breeding areas.”