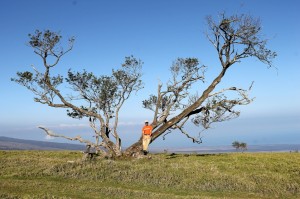 HONOLULU – Lovers of the forests and their magnificent specimens are now invited to submit nominations to recognize Hawaii’s largest and finest trees.

The Department of Land and Natural Resources (DLNR) is accepting nominations by December 31, 2013 for the 2014 National Register of Big Trees. Across the United States, the largest trees of their species joined the ranks of the more than 780 national champion trees listed in American Forests’ National Register of Big Trees. More than 40 new champions were crowned across 50 states and the District of Columbia, including 6 new champions in Hawaii.

The 10 Nationally Crowned Champions in Hawaii include:

Since 1940, American Forests National Big Tree Program has promoted the importance of planting and caring for trees and forests in helping to sustain healthy ecosystems and life on Earth. The program has campaigned to locate, protect and save the biggest specimens of every native and naturalized tree species in the United States.

Beyond national champions, Hawaii’s Big Tree Competition also recognizes the biggest trees in Hawaii using the same equation as the national program. Sheri Shannon, coordinator of American Forests National Big Tree Program said: “Anyone can be a big tree hunter. It’s because of avid tree lovers that we are able to find some of the nation’s biggest trees.”

Attached: 2 photos of current champions (a Mamane and a Wiliwili). More photos and information can be found on the Big Tree website https://dlnr.hawaii.gov/forestry/info/big-tree/ 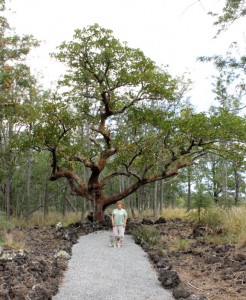 About Division of Forestry and Wildlife (DOFAW) Forestry Section
The Forest Reserve System was created by the Territorial Government of Hawai’i in April 25, 1903. Early territorial foresters recognized the need to protect mauka (upland) forests to provide the necessary water requirements for the lowland agriculture demands and surrounding communities. With its inception, the Forest Reserve System represented a public-private partnership to protect and enhance important forested mauka lands for their abundance of public benefits and values. Though this original partnership has evolved over the decades, today the tradition is carried on by the Department of Land and Natural Resources, Division of Forestry and Wildlife (DOFAW) for public Forest Reserve lands. The Forest Reserve System is managed under the guidance of the Hawai‘i State Constitution, Hawai‘i Revised Statutes (Chapter 183) and associated Hawai‘i Administrative Rules (Chapter 104). Through these directives, DOFAW focuses its resources to protect, manage, restore, and monitor the natural resources of the Forest Reserve System. The Forest Reserve System accounts for over 580,000 acres of state managed land, and without continued management these natural resources that provide a suite of ecosystem services to Hawai‘i residents and visitors to the islands, these resources would fade away. The Forestry Section also oversees a number of private landowner assistance programs including: Forest Stewardship Program, Conservation Reserve Enhancement Program, Forest Legacy Program, and Urban and Community Forestry Program. These programs provide various incentives to private landowners to conserve and sustainably steward forested lands for watershed protection, wildlife habitat and a variety of forest products.

About American Forests
American Forests restores and protects urban and rural forests. Founded in 1875, the oldest national nonprofit conservation organization in the country has served as a catalyst for many of the most important milestones in the conservation movement, including the founding of the U.S. Forest Service, the national forest and national park systems and literally thousands of forest ecosystem restoration projects and public education efforts. In the last two decades, American Forests has planted more than 44 million trees in forests throughout the U.S. and in 44 countries, resulting in cleaner air and drinking water, restored habitat for wildlife and fish, and the removal of millions of tons of carbon dioxide from the atmosphere. Learn more at www.americanforests.org.

About The Davey Tree Expert Company
The Davey Tree Expert Company, with U.S. and Canadian operations in more than 45 states and five provinces, provides a variety of tree care, grounds maintenance and consulting services for the residential, utility, commercial and government markets. Davey is the premiere sponsor of the National Register of Big Trees and has been committed to developing new technologies to support the environment for more than a century. For more information, visit www.davey.com.