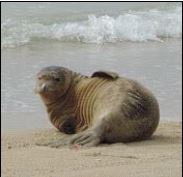 HONOLULU — The Department of Land and Natural Resources (DLNR) is asking the public to comply with state and federal “no feeding, no approach” rules to protect a Hawaiian monk seal pup that has recently been seen in harbors along Oahu’s south shore.

This 8-month-old seal with red flipper tags N36/N37 was born in May 2013 on the reef runway beach outside of Keehi lagoon. Also known as “U`ilani” (which means royal beauty in Hawaiian), it has recently been seen in Keehi, Kewalo, and Ala Wai small boat harbors interacting with boat owners and resting under the docks. She may also have been seen in Honolulu harbor.

It is one of fewer than 1,100 seals that are alive today and is protected by the federal Endangered Species Act, the Marine Mammal Protection Act, and Hawaii State Law.

Please DO NOT FEED OR INTERACT WITH THIS SEAL. An innocent handout today will likely reduce her chances of survival if she continues to seek out unnatural food sources.

It can be tempting to feed or interact with a young impressionable monk seal when they are small. However, if this behavior continues as they get older and larger they may become more dependent and demanding of food or attention and can inadvertently become a public safety concern.

Anyone who may encounter this or any seal in any Oahu harbor, is asked to call the NOAA sightings line (808-220-7802) as soon as possible so NOAA Fisheries and DLNR staff can respond accordingly.

“It’s against state law to throw discarded fish waste into the harbor or to try to feed monk seals anything. To avoid attracting seals, and large predators into the harbors, be responsible with your waste; refrain from throwing fish or bait scraps into the harbor,” said William J. Aila, Jr., DLNR chairperson.

Seals become habituated and conditioned to people through feeding, interactions in the water as in trying to swim with them, and even eye contact.

“Seals who become conditioned to people have had to be removed from the wild in the past due to evolving human safety concerns that people cause in the first place. With the dwindling population, we can’t afford to have this female become conditioned to people as she will be a valuable reproductive member to the recovering monk seal population when she matures in 4 to 5 years.” said David Schofield, Marine Mammal Health and Response Program manager for NOAA Fisheries Service.

All harbor/marina users are encouraged to heed the following guidelines:

Video of this seal (231 MB) is available at hawaiimarinewildlife.com 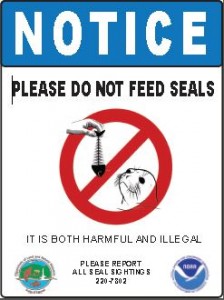