UNUSUAL CORALS DISCOVERED OFF OF THE BIG ISLAND 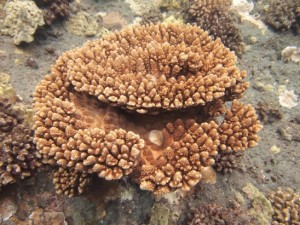 KAILUA-KONA, HAWAII — A coral species new to the main Hawaiian Islands has been discovered in West Hawaii by a research team of the state Department of Land and Natural Resources (DLNR) Division of Aquatic Resources divers, under the leadership of senior biologist Dr. Bill Walsh.

While doing reconnaissance SCUBA dives along the Kona coast of the Island of Hawaii, the dive team came across a large number of coral colonies, which none of the researchers had ever seen before. These robust finger-like colonies didn’t even look like they were related to any other corals in the vicinity of the main islands.

Visual identification of the coral was subsequently confirmed by genetic sequencing done by Narrissa Spies of the Richmond Lab at the Kewalo Marine Laboratory, Pacific Biomedical Research Center in Honolulu.

“The presence of these coral colonies is a significant contribution to our understanding of local reef diversity and opens up speculation about what other rare corals may be found on the reefs of Hawaii island,” Walsh said.

Several Acropora species have been identified in the Northwestern Hawaiian Islands; previously, several small colonies of the table coral Acropora cytherea have been reported from Kauai, and a single colony was recently sighted off Oahu.

The discovery of this rare species in the main Hawaiian Islands emphasizes the need for local marine and land-use conservation practices. Members of this genus have a low resistance and low tolerance to bleaching and disease, which can be made worse by pollution, overfishing, and climate change. They are also a coral species preferred by Acanthaster planci, the crown-of-thorns starfish, which is a coral predator.

Acropora gemmifera is common in shallow, tropical reef environments in the Red Sea, Australia, the Indo-Pacific, and central and western Pacific, but there are few records from the Northwestern Hawaiian Islands. It does occur at Johnston Atoll, approximately 900 miles southwest of Hawaii.

There have been no historical reports of any Acropora species occurring around the Island of Hawaii nor were any observed in more than 4,500 DAR coral reef monitoring/research dives over the past 15 years.

Typically, this species is found intertidally and subtidally from 1 to 15 meters. The colonies can vary in color from tan/brown to green, blues and even purples. The Kona population is located in waters 4 to 10 meters deep and consists of tan/brown colonies ranging from young encrusting forms to mature colonies estimated to be at least 80 years old. A total of 75 A. gemmifera colonies were found at the Kona site along a 50-meter stretch of reef.

This finding was recently published online in the journal Coral Reefs.