Posted on May 30, 2014 in Boating & Ocean Recreations, News Releases 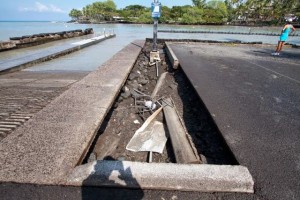 KAILUA-KONA, HI – The Department of Land and Natural Resources will begin two repair projects addressing tsunami damage at its West Hawaii boating facilities, starting May 27 at Kailua-Kona Pier and June 9 at Keauhou Small Boat Harbor. Both projects are expected to be completed by the end of 2014.

Funds for the estimated cost of tsunami damage repairs were appropriated by the 2011 State Legislature. FEMA will reimburse costs for up to 75 percent.

Work planned for the Kailua-Kona Pier will include paving of the entire hardtop or pier area, repair of the pump out station at the southwestern end of the pier, repair of the western and eastern revetment walls, and repair of the old U.S. Coast Guard office, which will be used for DLNR Division of Boating and Ocean Recreation staff upon completion. The launch ramp will need to be closed for two days during repair of the bottom or “toe” of the ramp. Ramp permittees who will be affected will be directly notified of the ramp closure.

Specific areas of the pier will be blocked off during the construction process using water-filled jersey barriers. Contractor Drayko Construction will begin work on the southwestern portion of pier and work its way toward the entry gate. The public is advised to use caution while in the pier area. Project cost is $1,626,000.

The boat launch ramp and wash down area will need to be closed while it is being re-paved. This work is expected to completed by July 31, 2014. Project cost is $428,000.

# # #
Images of the project areas can be found on Google+