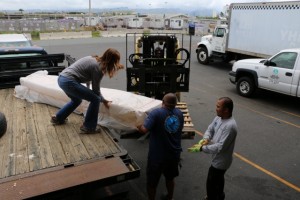 HONOLULU –The people of Tanohata Village, in the Iwate Prefecture, on Japan’s northeast coast “are slowly, but surely walking on the path to recovery as a united body,”according to Tanohata Village Mayor Hiroshi Ishihara. The tiny village was devestated by the earthquake and tsunami that struck Japan in 2011.

Now, a sign being returned from Hawaii may provide further sense of hope and renewal.  Today, the large wooden sign from the village, which washed up on a beach near Kahuku, Oahu, was loaded into the cargo hold of a Hawaiian Airlines jet and shipped to Sendai International Airport. From there a delegation from Tanohata Village will transport it home.

“This small gesture, a result of cooperation between state and federal agencies, the government of Japan, and Hawaiian Airlines, symbolizes the concern the people of Hawaii continue to have for the victims of the 2011 tsunami,”Gov. Neil Abercrombie said. “We hope, in some small measure, the return of this sign from the distant shores of Hawaii will further the healing and recovery of the people of Tanohata Village.”

In a letter sent by Mayor Ishihara, he writes, “Thank you very much for finding and saving the sign –our village’s irreplaceable memento –which was lost during the Great East Japan Earthquake and Tsunami, from a tremendous amount of debris items –we imagine as many as the number of stars in the sky –that ended up on Kahuku Beach on the Oahu Island. We are truly and deeply moved by the fact that you took the time to deliver the message to us, connecting many people and their compassion. Our village will treasure the memento that is coming back to our hands through your cooperation.”

“The world watched stunned and heartbroken by the devastation the tsunami caused in terms of  loss of life and property,”said William J. Aila, Jr., the chairperson of the Department of Land and Natural Resources (DLNR). “My department has worked closely and in coordination with the National Oceanic and Atmospheric Administration (NOAA) to track and recover Japan tsunami debris believed to have washed up in Hawaiian waters,”Aila explained. “Debris that makes its way to Hawaii is usually returned at the owner’s expense; however, Hawaiian Airlines volunteered to ship the sign back at no charge.”

The Tanohata village sign is one of fewer than 20 items that have been positively identified as arriving in Hawaii as a result of the Japan tsunami.

Kyle Koyanagi, regional coordinator for NOAA’s Marine Debris Program in Hawaii said, “The websites both NOAA and DLNR established for people to report possible tsunami debris has resulted in numerous small vessels (skiffs) and other items being recovered. People are asked to provide specific information about where they find debris and to take pictures. Based on this information a determination is made about whether further investigation is necessary to prevent the introduction of invasive species or other things that could damage Hawaii’s environment.”

Some of the Tanohata Village sign’s lettering broke off during the tsunami or during its open ocean voyage from Japan to Hawaii. Koyanagi was instrumental in coordinating with the Japanese Consulate in Honolulu to try and identify the origin of the sign.

Consul General of Japan in Honolulu, Toyoei Shigeeda said, “The lettering on the sign, 「しまのこし村営住宅, means “Shimanokoshi village housing.”The people of Tanohata village wanted it returned for an exhibit and to serve as a useful reference for future generations to learn about and understand the tsunami disaster of March 11, 2011. We’re all excited that now, more than three years after the tsunami, this sign can be returned as a reminder and symbol of what was lost.”

The sign was wrapped and crated by DLNR staff before Hawaiian Airlines cargo personnel loaded it onto HA 441 for the direct flight to Sendai. Tim Strauss, vice president of cargo for Hawaiian Airlines, remarked: “We deeply value our relationship with the people of Japan, and it is our great honor to do our part in returning this precious piece of cargo to the people of Tanohata.”

To report large quantities of marine debris, debris with living organisms on it, or debris too large to remove by hand, call (808) 587-0400 and then email any photos to: