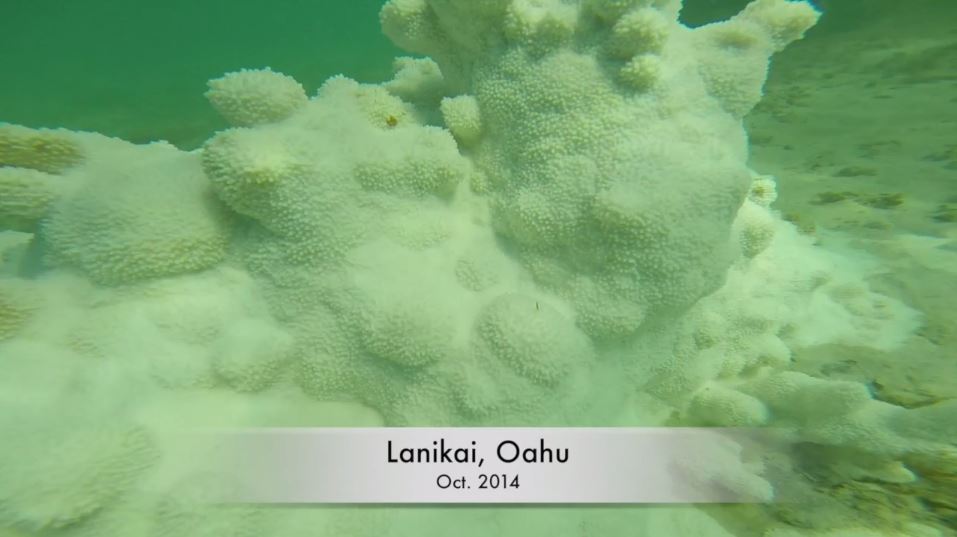 HONOLULU – Higher than normal sea surface temperatures (SSTs) have resulted in above-normal levels of coral bleaching at numerous near-shore locations on Oahu. This is especially severe along the windward coastline. Reports from ocean users and Eyes of the Reef Network (eorhawaii.org) volunteers prompted a response from the Dept. of Land and Natural Resources (DLNR), Division of Aquatic Resources (DAR) Coral Rapid Response Team.

Over the past week the DAR team, along with partners, The Nature Conservancy and the Hawaii Institute of Marine Biology (HIMB) have conducted in-water surveys and assessments in Kaneohe Bay and off Lanikai and Waimanalo beaches. “Unfortunately, we are seeing evidence of wide-spread bleaching in shallow, near shore waters of windward Oahu,” said Frazer McGilvray, DAR administrator. “Coral bleaching is a stress response due to warmer ocean temperatures. Corals lose the color from their tissue, turning them snow white.”

Over the past few weeks, the National Oceanic and Atmospheric Administration’s (NOAA) Coral Reef Watch program has continued a high coral bleaching alert for waters around the Hawaiian archipelago. The warnings are based on indicated high SSTs, resulting in a high likelihood for bleaching.

Moderate to severe coral bleaching has also been observed in Papahanaumokuakea National Marine Monument, co-managed by state and federal partners. Divers from HIMB and NOAA conducted surveys in the Northwestern Hawaiian Islands during a recently completed research trip.

William J. Aila, Jr., DLNR Chair said, “Corals can recover from bleaching if temperatures return to a normal range, but it can take many weeks to many years for them to fully recover from a bleaching event. Unfortunately, temperature forecasts suggest that the risk of bleaching will increase over the next several weeks. It is important that we continue to monitor the extent and severity of this bleaching event. It’s also critical that ocean users avoid disturbing corals at any time to avoid additional stress on them.”

Ocean users are encouraged to report coral bleaching through the Eyes of the Reef Network, which helps the DAR Rapid Response Team evaluate reef conditions and inform best management options. The department encourages anyone with underwater cameras to send photographs of bleached corals to [email protected]

The NOAA Coral Watch prediction tool click may be viewed at: coralreefwatch.noaa.gov/satellite/index.php