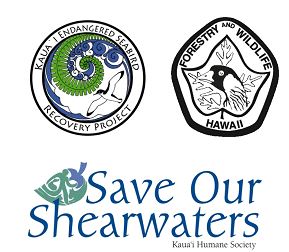 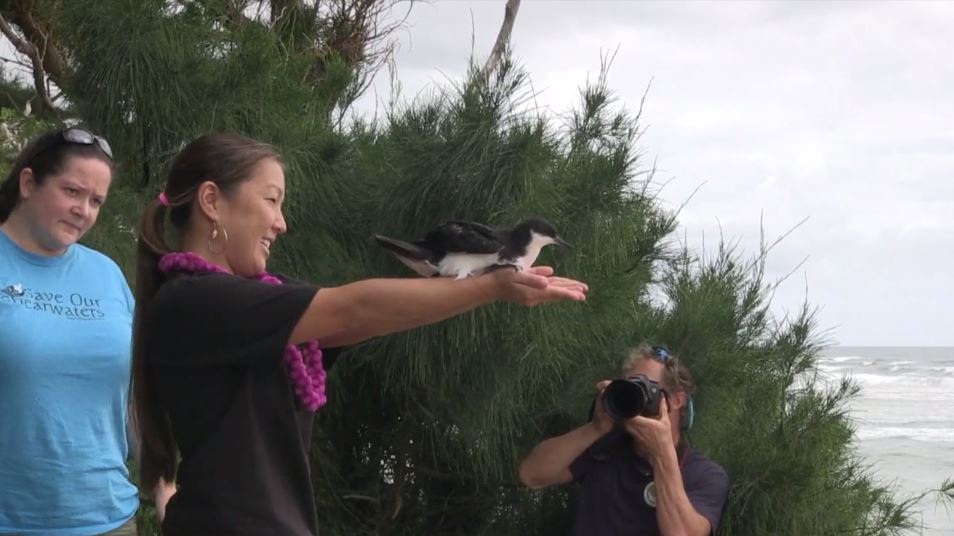 LIHU‘E – Four fledgling ‘A‘o (Newell’s Shearwaters) were released to a life on the open ocean today by fourth-grade students from Island School, accompanied by their teacher Natasha Arruda and Kumu, Sabra Kauka.

Two other ‘a’o were released last Thursday by students from ‘Ele‘ele Elementary School as part of the annual E Ho‘opomaika‘i ‘ia na Manu ‘A‘o (A Cultural Release of the Native Newell’s Shearwater) events.  The birds were all fledglings rescued by concerned members of the public on Kaua‘i after being grounded by artificial lights.

The releases, now in their 8th year by the Kaua‘i Endangered Seabird Recovery Project (KESRP) and Save Our Shearwaters (SOS), give the school children the chance to participate in the release of these endangered seabirds back into the wild.  The students did an oli aloha before and an oli mahalo after the release. During the release the students gave a Hawaiian pule (blessing prayer) telling the bird that it is okay to fly, and be strong on its journey.

“This is a great opportunity for the school children from ‘Ele‘ele Elementary to see these beautiful birds up close and personal,” said Nathan Banfield, KESRP field crew leader, who organized the event. “The ‘A‘o is a seabird that is very rarely seen, so the event is a unique opportunity for the children to form a connection with the rarest seabird on Kaua‘i.”

The ‘A‘o is an endangered seabird found only on the Hawaiian Islands.  Kaua‘i is the last main refuge of the species with an estimated 90% of the world population found on the island.  Unfortunately the populations of this montane-nesting shearwater have declined dramatically in recent years.  The decline is attributed to a number of issues including predation by introduced predators (such as feral cats, rats and pigs), collisions man-made structures and fall-out of fledglings due to artificial lights.

As birds begin to fledge from their burrows in the interior of the island and fly out to sea for the first time they become attracted to bright lights along the coast.  They then circle these lights until they become exhausted and crash to the ground in a phenomena known as ‘fall-out’.  If they are not subsequently rescued they get run over by cars or eaten by cats and dogs.  At this time of year, concerned citizens are therefore on the look-out for downed birds, which they rescue and hand over to the Save Our Shearwaters Project.  The birds are rehabilitated as necessary and then released back into the wild.

Staff from the Kaua‘i Endangered Seabird Recovery Project also gave a presentation to the students from ‘Ele‘ele and Island Elementary Schools before each release..
The presentations focused on the conservation of endangered seabirds, helping to increase the children’s understanding of the importance of the birds to the island and the challenges involved in their conservation.  After the presentation the schoolchildren were asked why it was important to save the Newell’s Shearwater.

“I think we should protect the ‘A‘o because they are very special birds that are important to our ‘aina”, said Wailenalena Kaohi (age 9).  Noah Bueno (age 9) pointed out that “The ‘A‘o is almost going to be extinct and it is the Hawaiian people’s bird”.

Makana Nishikuni (age 9) stated that “It is an endangered animal and it only lays one egg each year so we need to take care of all the birds and all the eggs,” while John Rainier Fernandez (age 11) added “They help fishermen and they are part of Hawai‘i culture.”  Clarinz Ringor (age 8) said that they “contribute beauty to our island” and Hezikiah Mae Serrano (age 8) concluded “Plus their sounds are amazing!”

The Kaua‘i Endangered Seabird Recovery Project is a State of Hawai‘i Department of Land and Natural Resources Division of Forestry and Wildlife project, administered by the Pacific Co-operative Studies Unit of the University of Hawai‘i.  The Save Our Shearwaters Program is housed at the Kaua‘i Humane Society and is supported by the Kaua‘i Island Utility Cooperative, while transport to and from the event was funded by the Kilauea Point Natural History Association.

Additional information: Anybody finding a downed ‘A‘o should take the bird to the nearest aid station (found at all fire stations around the island) and leave detailed information on where and when it was found. You can call the SOS hotline at (808) 635-5117 for more information or to let SOS know that you have dropped off a bird.  SOS aid stations are checked every morning for seabirds, which are then taken to SOS headquarters in the Kaua‘i Humane Society for rehabilitation and release.

For more information on the Kaua‘i Endangered Seabird Recovery Project, check out the project’s webpage https://kauaiseabirdproject.org/ or on Facebook. 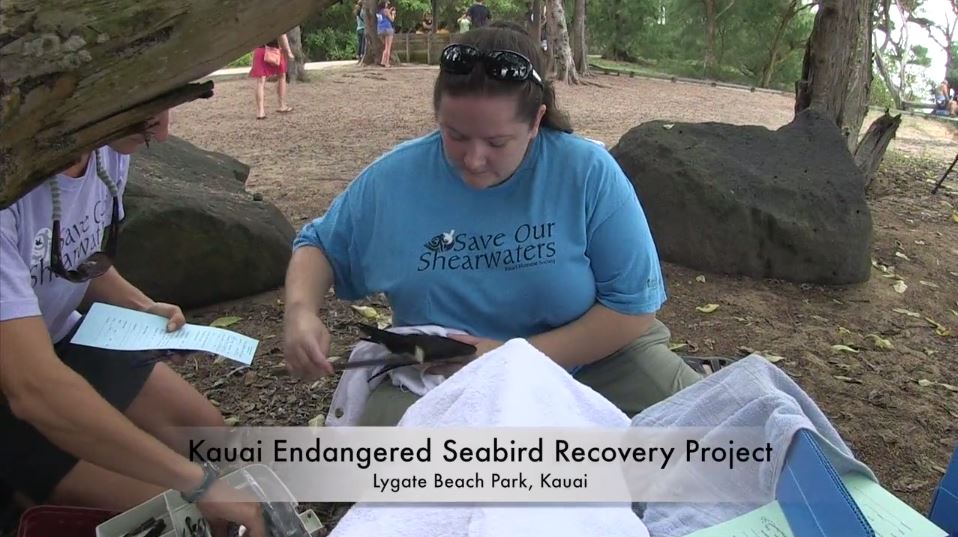