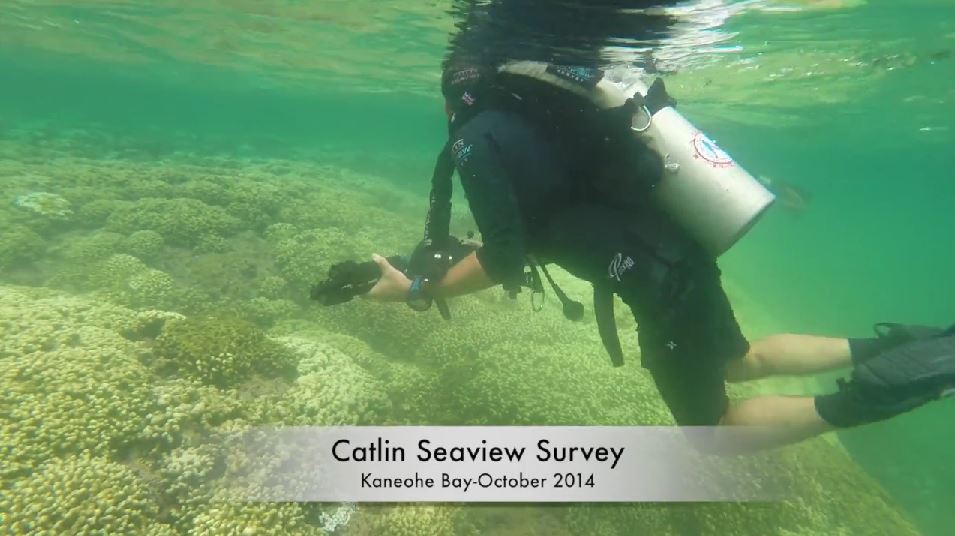 HONOLULU – The wide-spread coral bleaching event being experienced on Oahu, Kauai and Maui has attracted the attention of two separate teams interested in documenting and further studying its causes.

The director of the Catlin Seaview Survey, based in Australia, worked this week with scientists from the Department of Land and Natural Resources (DLNR) Division of Aquatic Resources (DAR), the Hawaii Institute of Marine Biology (HIMB) and the National Oceanographic and Atmospheric Administration’s (NOAA) Coral Watch Program.  The Catlin Seaview Survey, funded by Catlin Insurance, is creating a baseline record of the world’s coral reefs, in high-resolution, 360-degree panoramic vision. Survey director Richard Vevers used an underwater camera, much like the one Google uses to create Google Streetview images, to document bleaching on several affected patch reefs in Kaneohe Bay on Oahu’s windward coast.  Vevers explained, “Our photographic surveys will help scientists, policy makers and everyone interested in ocean health, see and understand the issues, like bleaching, our reefs are facing. By clearly monitoring change over time, our hope is this information will inform reef protection measures now and into the future.” More information about Catlin Seaview Survey and images are available at: www.catlinseaviewsurvey.com

Another team from Woods Hole Oceanographic Institute in Massachusetts is also on Oahu this week conducting in-water measurements of bleaching corals. They’re interested in quantifying superoxide which is the main oxygen radical believed to be responsible for bleaching.  As of now, no in situ measurement of this kind is available.

“Through the efforts of our partners and of the DAR Rapid Response team (RRT), we continue to quantify the scope and severity of this current bleaching event. We’re very appreciative of the expertise and additional information being provided by both Catlin Seaview Survey and Woods Hole Oceanographic Institute,” said Frazer McGilvray, DAR administrator.

Since being first reported in August in Papahanaumokuakea Marine National Monument (the Northwestern Hawaiian Islands) and in September on Oahu, survey and assessment efforts have continued and expanded on Oahu, Kauai and Maui.  The DAR Rapid Response Team has conducted surveys at five locations on Oahu and three locations on Kauai.

DAR biologists have surveyed several locations on Maui. The RRT has tagged 20 coral colonies in Kaneohe Bay and continue to monitor for signs of recovery. The overall trend for bleaching at windward Oahu locations, which is considered the most severely affected, is that most areas remain bleached and some are beginning to shows signs of mortality.

Data from a NOAA buoy indicates water temperatures have dropped since early October (from 86F to 82F), but is still dangerously warm for corals.

DAR has received 60 coral bleaching reports from people through the Eyes of the Reef Network (www.eorhawaii.org) since late September from the islands of Oahu, Maui, Kauai and Molokai.  These reports indicate various levels of bleaching from pale to completely white and mostly in shallow, near shore waters.

NOAA’s Coral Reef Watch predicts bleaching alerts to continue for the next month.