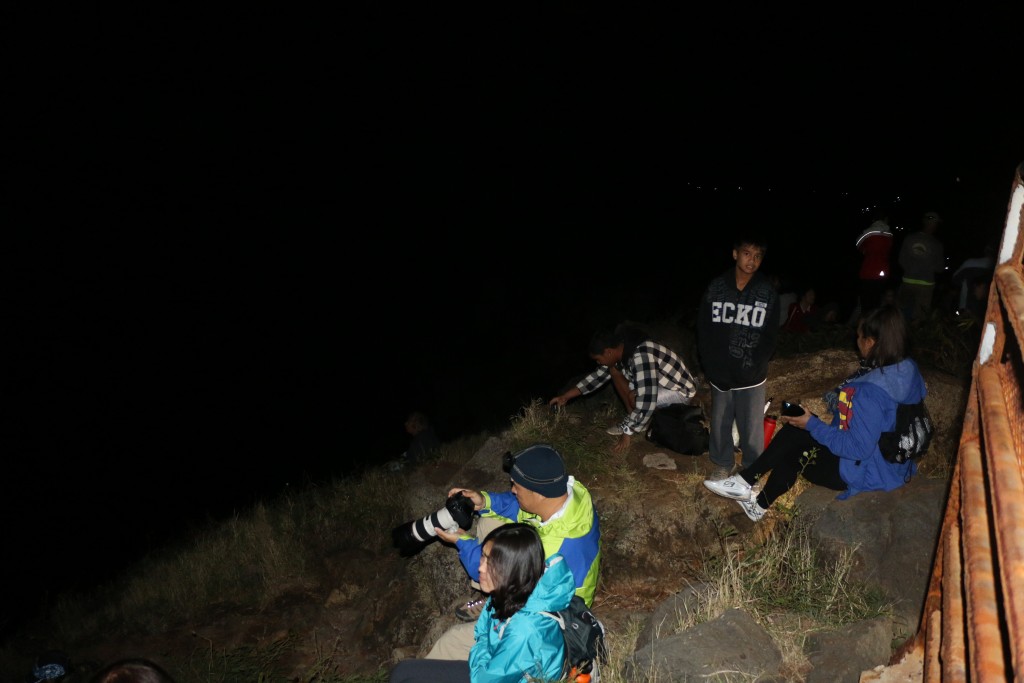 For more on First Day Hikes and Hawaii State Parks
(Click on image to watch video)
Honolulu – Sunrise on this first day of 2015 was foiled by heavy cloud cover, but an estimated 500 early morning hikers still made the one and a half mile trek to the Makapu’u Lookout in Kaiwi State Park in East Oahu, as part of the annual First Day Hike.
For the past four years, First Day Hikes have been organized by state park systems in all 50 states.  Hawaii has the distinction of attracting what is perhaps, the largest number of hikers for a single event, according to America’s State Parks, the umbrella organization that initiated the annual hikes and tracks them around the country.
Curt Cottrell, the assistant administrator of the Dept. of Land and Natural Resources (DLNR) Division of State Parks has organized the Makapu’u First Day Hike for each of the last four years.  He said, “When you consider the stunning views of Kaiwi Channel and the neighbor islands of Molokai, Lanai and Maui, Windward Oahu, Diamond Head, Koko Crater, and the opportunity to maybe see humpback whales breaching – all during the first sunrise of the new year, it’s really little wonder that Hawaii’s hike is the most unique and probably has the most participation for a single-location hike in the country.”
People lined the paved pathway for at least a half mile below the uppermost overlook in the state park.  The Hawaii event has grown steadily every year and seems to be particularly popular with Japanese visitors.  Sunrise at 7:09 a.m. was greeted with a pu by Gabriel Spencer of Ali’i Entertainment. Taiko drumming was provided for a third year, by the Taiko Center of the Pacific. It is a school of traditional and contemporary Japanese drumming established in 1994 by Kenny and Chizuko Endo to preserve traditional Japanese drumming and to create new music for taiko.
A visitor from Taiwan set out from Waikiki on his bicycle at 2 a.m.  He arrived at 4 a.m. and was greeted with solitude and silence.  Less than an hour later, hundreds of people began arriving.

James Fritz of Waimanalo was among a group of people who crowded onto the uppermost viewing area where the Taiwanese cyclist was resting.  Fritz said he missed the first two First Day Hikes and barely made the third, but arrived on top early to secure a good viewing spot.  Commenting on the weather prior to sunrise he said, “Oh it’s beautiful. The stars are out, it’s cold.  If everybody bundled together we could stay pretty warm.”