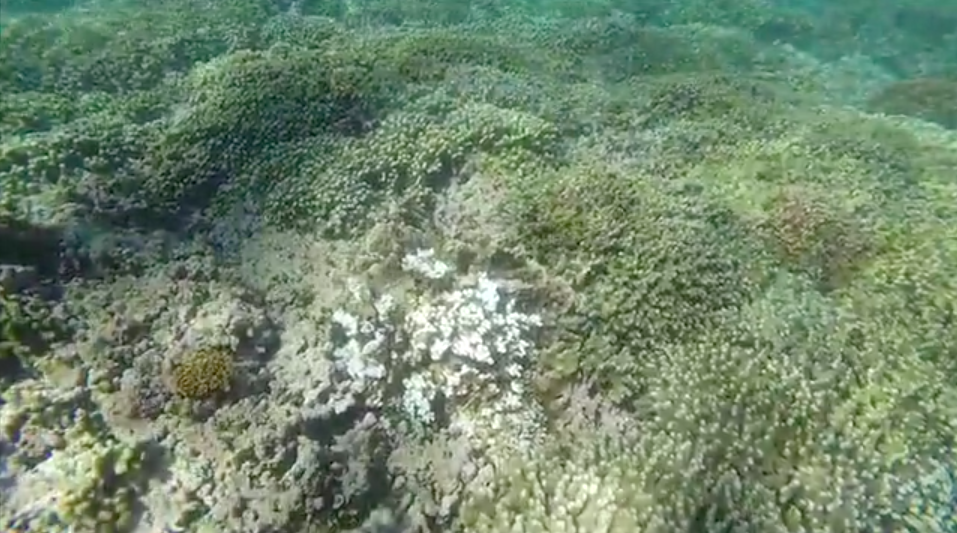 HONOLULU – Many of the coral colonies around the Main Hawaiian Islands, impacted by a late 2014 bleaching event are showing signs of recovery.  Bleaching is a stress response, which causes corals to lose algae and color from their tissue, making them appear snow white. The fall bleaching of corals in 2014; mostly in shallow waters off Oahu, Kauai, and Maui was caused when sea temperatures spiked at 86 degrees.

Anne Rosinski, a marine resource specialist with the DLNR Division of Aquatic Resources (DAR) explained, “In general, coral can recover from bleaching but it can take weeks to years for a coral reef to fully recover.  In recent weeks teams from DAR and the Hawaii Institute of Marine Biology have seen color and life returning to corals, but they’ve also documented areas of dead coral and white, bleached coral.”

Temperatures are predicted to become dangerously warm for corals again in 2015.  Bleaching is forecasted to happen during the time of highest sea temperatures from July-October.  Globally coral bleaching is expected to become a more common phenomenon in coming decades.

On Kauai, DAR education specialist Katie Nalesere noted, “I think in general around Kauai we are starting to see a recovery.  The sea surface temperature has dropped about 5 degrees since our initial assessments.” Nalesere believes people are becoming more aware of how actions on land have a direct impact on life in the ocean.  She and her DAR colleagues continue to encourage people to practice sustainability and to reduce their carbon footprints to help combat coral bleaching and diseases associated with climate change and land use practices.

Darla White, the DAR special projects coordinator on Maui said, “We have coral colonies that are tagged and numbered so that we can find them each time.  We tagged both bleached colonies and colonies that have a tissue-loss disease; a high mortality disease that we anticipate may worsen if coral bleaching consistently occurs in the next couple of years.  We are going to continue following these corals to understand whether or not they are going to bleach again, and if so, will they be more susceptible to disease thereafter.

As on Kauai and Maui, the recovery report for Oahu is a mixed bag. After an assessment trip onto patch reefs in Kaneohe Bay, DAR aquatic biologist Stacy Bierwagen commented, “I think overall, the general consensus has been that everything in Kaneohe Bay that is recovering is going to stay recovered at this point. What we are wondering about in the future is if the corals that have recovered will do so again after the next bleaching event, or will it be worse for them?”

In 2014, bleaching was also observed on several reefs of the Northwestern Hawaiian Islands, and scientists will be returning to those locations in the summer of 2015 to find out whether those bleached corals have recovered.

During the 2014 bleaching season, DAR received more than 100 reports from ocean users and 60 photographs of bleaching from across the state, which helped the monitoring teams find and assess bleached coral areas.  Anyone who observes bleaching is encouraged to report it and send photographs if possible to: www.eorhawaii.org

Updates and scientific data from the 2014 bleaching event are available on DLNR’s Reef Response website: https://dlnr.hawaii.gov/reefresponse