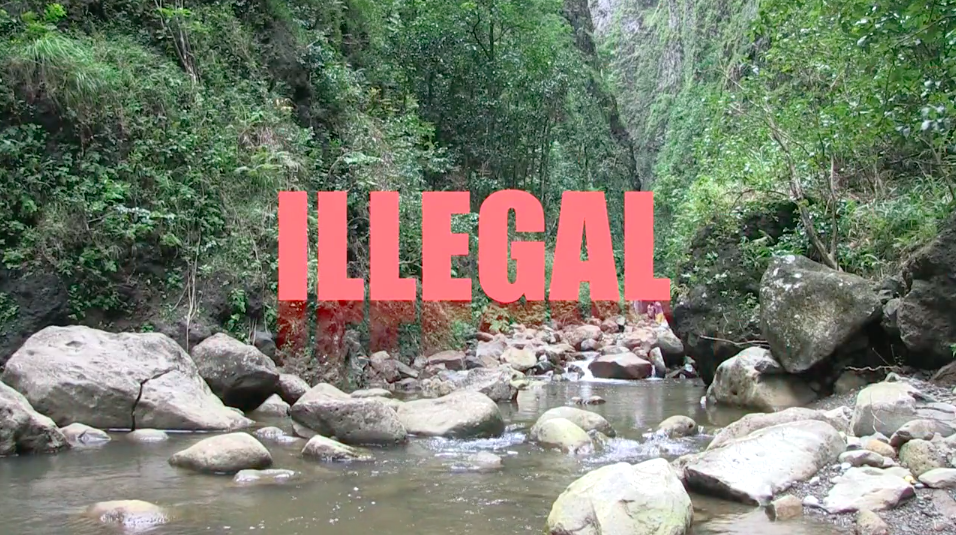 HONOLULU – A keyword search of “Sacred Falls” online reveals dozens and dozens of websites related to the long-closed Hawaii state park.  Unfortunately many of these sites and blogs continue to encourage hikers and others to visit Sacred Falls State Park, though it’s been closed since shortly after a 1999 Mother’s Day accident which killed eight people and left dozens of others seriously hurt.

In an attempt to counter misinformation often spread on the internet, DLNR has produced a seven-minute long video that depicts the dangers at Sacred Falls State Park, and reinforces the illegality of entering the park. “In 2014, our officers wrote more than 120 citations to people who entered the park illegally.  Despite the presence of dozens of signs, they often told officers that, {the internet said it was okay or the internet said the signs were just for liability},” said Jason Redulla, acting chief of the DLNR Division of Conservation and Resources Enforcement.  “We take the responsibility of protecting people from the continued danger of rock falls and flash flooding seriously and have a zero tolerance policy regarding entry into Sacred Falls. If you get caught you will be cited,” Redulla added.

“What people often don’t consider, is that if they get hurt and have to be rescued they are putting emergency personnel at great personal peril,” according to Dan Quinn, administrator of the DLNR Division of State Parks.  Due to the very high and steep walls that frame the waterfall, helicopter rescues are impossible and anyone injured or killed there has to be carried out by rescuers who first have to hike in themselves. The trail itself can be slick and treacherous and the area is littered with rocks that have fallen from high above.  It was a sudden rock fall that trapped, killed, and maimed people during the Mother’s Day tragedy of 16 years ago. “Geological experts who’ve surveyed this area tell us that rock falls will continue unabated and can’t be predicted, so anyone who goes to the falls is playing roulette with their lives,” Quinn said.

Anyone cited for entering Sacred Falls State Park illegally, has to make a court appearance and could face significant fines along with possible jail time. “With so many wonderful waterfall hikes available around Hawaii, there is no reason for anyone to break the law and put their own and the lives of rescuers at risk by entering Sacred Falls State Park,” concluded Carty Chang, interim DLNR Chairperson.