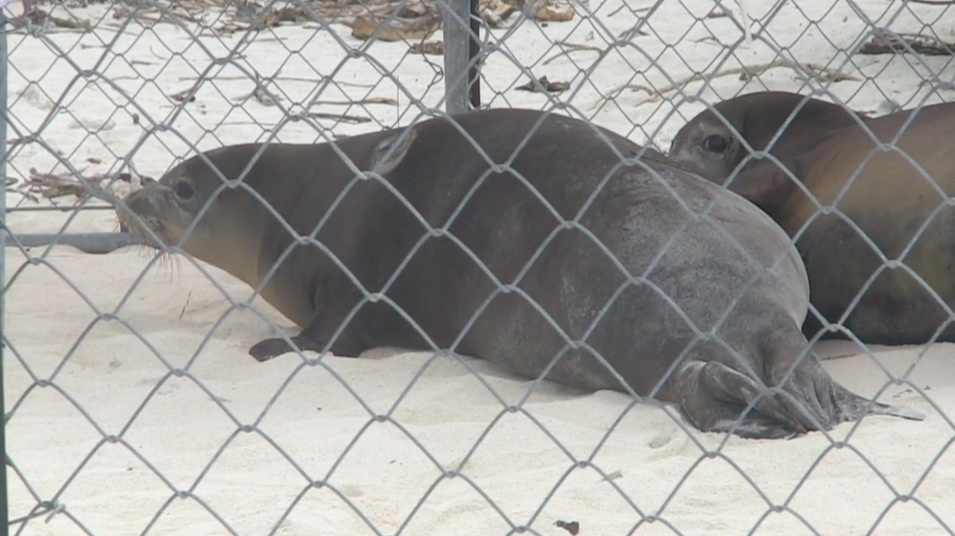 “The successful rehabilitation and release of these young seals demonstrates the collaboration and innovation that will be necessary to save Hawaiian monk seals from extinction,” said Dr. Rachel Sprague, NOAA Fisheries’ Hawaiian Monk Seal Recovery Coordinator. “The dedicated efforts displayed by NOAA, The Marine Mammal Center, U.S. Coast Guard, State of Hawai’i Department of Land and Natural Resources, and U.S. Fish and Wildlife Service show how it will take every one of us to help protect these extraordinary animals. As a result of our intervention, two young female monk seals are now returning home to a bright future where they can contribute to the recovery of their species.”

The two juvenile females, Pua ‘Ena O Ke Kai (“fiery child of the sea”) and Meleana (“continuous song”), or Pua and Mele for short, were transported last September aboard NOAA Ship Oscar Elton Sette to the Ke Kai Ola hospital in Kona, established by the Center in mid-2014. Once at Ke Kai Ola, staff and volunteers with the Center spent five months nursing the animals from their malnourished state to the fat healthy seals they are now. Now these females have a better chance of surviving their first two years of life and will hopefully grow to have their own pups.

Shortly after the hospital opened last year, Ke Kai Ola staff and volunteers also rehabilitated four other young seals, which were returned to French Frigate Shoals and Laysan Island within the Monument last September. In less than a year of the new hospital’s opening, it has made a significant difference in the future of these young seals, who would almost certainly have died without rehabilitation.

“With 40 years of experience caring for seals and sea lions, The Marine Mammal Center is a primary authority on preventing the extinction of the Hawaiian monk seal,” says Dr. Shawn Johnson, Director of Veterinary Science at The Marine Mammal Center. “After providing Mele and Pua with life-saving medical care, we’re proud to partner with NOAA Fisheries, the Coast Guard, the state of Hawaii and the Monument to release these healthy seals back to their ocean home.”

A U.S. Coast Guard HC-130 aircraft crew from Air Station Barbers Point on Oʻahu picked up the seals in Kona and flew them to Midway Atoll National Wildlife Refuge on March 18. On the evening of March 20, the seals were loaded onto the offshore supply ship Kahana and departed for Kure Atoll State Wildlife Sanctuary, located at the northernmost point in the Hawaiian archipelago, about 1,350 miles northwest of Honolulu. From the pickup in Kona until their release, the seals were monitored around the clock. Scientists from NOAA Fisheries and The Marine Mammal Center cared for the seals during transport and at Midway Atoll. After arrival at Kure Atoll on March 21, they were watched over by biologists from NOAA Fisheries and Hawaiʻi Department of Land and Natural Resources (DLNR) until their release on the 25th.

“The Coast Guard works closely with NOAA and U.S. Fish and Wildlife Service to protect marine mammals and endangered species under the Marine Mammal Protection Act and the Endangered Species Act,” said LT Lauren Gillikin, HC-130 aircraft commander. “By promoting the conservation of these mammals the Coast Guard helps to preserve the existing ecosystem.”

The Hawaiian monk seal is critically endangered, with fewer than 1,100 individuals in the wild, including about 900 in the Northwestern Hawaiian Islands. Fewer than one in five Hawaiian monk seal pups in the Northwestern Hawaiian Islands survive their first year due to threats like starvation, entanglement in marine debris, male aggression due to abnormally small population size, and more. NOAA Fisheries implements numerous strategies to combat these threats; their monk seal recovery program is the most proactive marine mammal conservation initiative in the world. At least 30 percent of the Hawaiian monk seal population is alive today because of the collaborative efforts to help save them.

Hawaiian monk seals transported from the Northwestern Hawaiian Islands to the Kona facility for rehabilitation may only be released back to the NWHI. Release at Kure Atoll is favorable given its recent good survival rates for young seals and opportunities for weekly visual surveys by DLNR staff stationed there. Seal movements will also be tracked via satellite for post-release monitoring.

About The Marine Mammal Center

The Marine Mammal Center is a nonprofit veterinary hospital, research and educational center dedicated to the rescue and rehabilitation of sick and injured marine mammals and to the study of their health. Since 1975, the Center has been headquartered in the Marin Headlands, Sausalito, Calif., within the Golden Gate National Parks and has rescued and treated nearly 20,000 marine mammals. The Center also operates a Hawaiian monk seal hospital in Kailua-Kona, Hawaii. For more information, please visit www.MarineMammalCenter.org