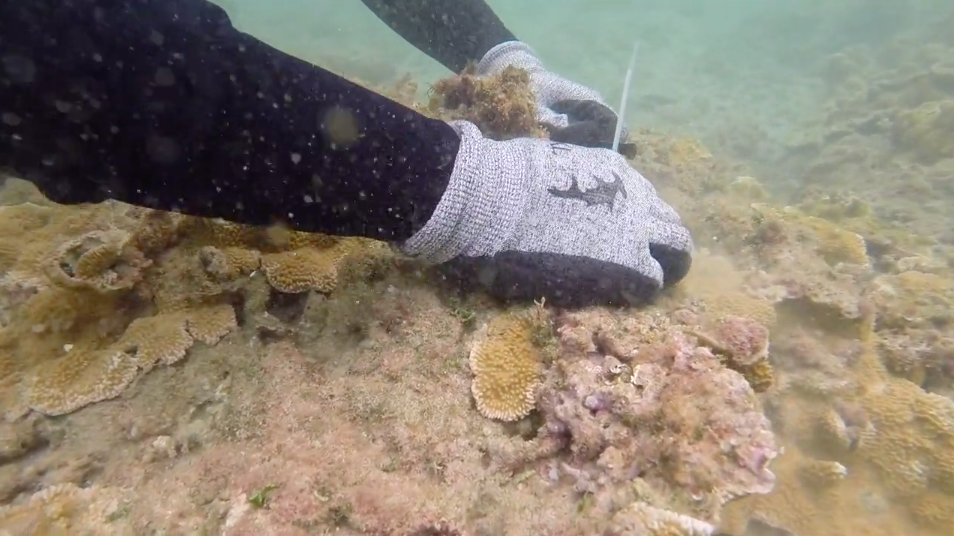 HONOLULU – Black Band disease was found at nearly half of the reef sites surveyed for the presence of the disease in near-shore waters on Kauai. These are the findings contained in a final report authored by the Hawaii Institute of Marine Biology (HIMB). Researcher Chris Runyon and her team surveyed 47 coral reef sites over the past year and found the disease in 23 (48%) of them. Runyon said, “A weak relationship was found between the abundance of the disease and water temperature. The lesions caused by black band disease become more active in the summer.” Previous work established the disease is affecting three species of Montipora, or rice, corals and also showed disease “hotspots” at Makua and Anini beaches.

A Management Response Team, established by the DLNR Division of Aquatic Resources (DAR) and various partners, has many questions to answer on the connection between the disease and environmental factors. In March, a diverse group of experts met to discuss and create a strategy to investigate environmental drivers of Kauai’s coral disease. DAR coral reef specialist Anne Rosinski said, “Our meeting included oceanographers, biologists, ecologists, geologists, geochemists, marine disease experts, and resource managers from DLNR, the U.S. Geological Survey’s Pacific Coastal and Marine Science Center (PCMSC), the University of Hawaii, the National Oceanographic and Atmospheric Administration, the Environmental Protection Agency, and the Surfrider Foundation.” A result of the meeting is a 2-3 year-long project led by Peter Swarzenski and the PCMSC team to investigate the relationship between black band coral disease, groundwater, and oceanographic drivers in the affected area.

Treatment activities so far included a novel putty treatment performed by HIMB scientists, which was successful in reducing the amount of coral tissue death from the disease. ). DAR staff will continue education and outreach on Kauai to help inform people about the disease and what they can do to help. Experts working to find the cause of the disease and to identify additional treatments continue to ask ocean users to report new coral disease outbreaks to The Eyes of the Reef Network (www.eorhawaii.org).

The full report from the Management Response Team is available at:
https://dlnr.hawaii.gov/reefresponse/kaua%CA%BBi-black-band-disease/