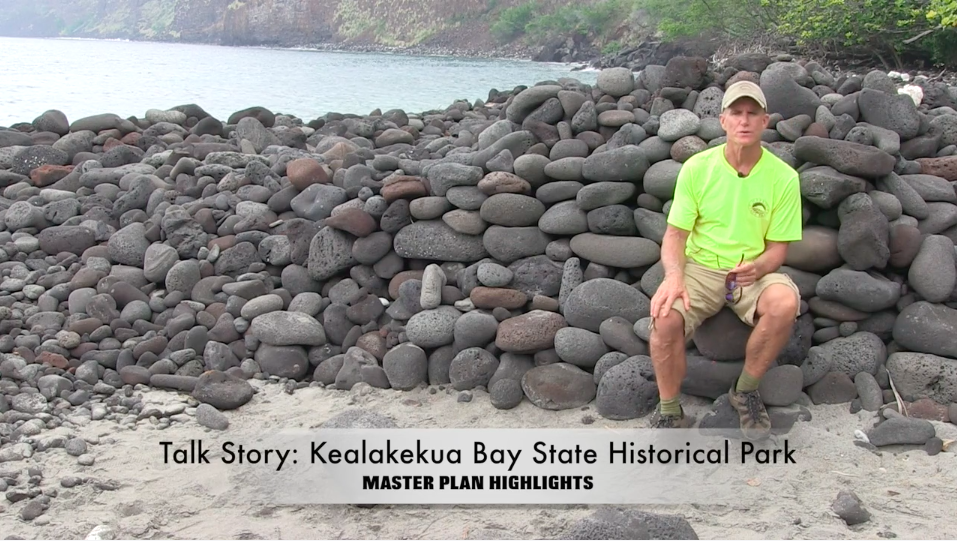 HONOLULU –  Kealakekua Bay State Historical Park on Hawaii Island is one of the state’s quintessential and most popular state parks.  It attracts thousands of kayakers, snorkelers, hikers, and people interested in learning about Hawaiian cultural resources.

The DLNR Division of State Parks is resuming planning for Kealakekua Bay State Historical Park.  Planning began in 2008, but at that time State Parks could only address 221-acres of land area around the bay.  With the inclusion of the bay and landing within the park in 2012,  plans must now include management for the entire 315 acre Bay, Nāpō‘opo‘o Landing/Wharf, marine resources and ocean recreation. Once a plan is drafted, after input and comment from individuals and various user groups, an Environmental Impact Statement (EIS) will be prepared for the entire 536-acre park.

Beginning this month, DLNR State Parks and its consultant Belt Collins Hawaii LLC will be resuming resource studies, updating a traffic study, initiate a marine resources survey and an ocean recreation assessment. A public meeting will be held in late summer or early fall to share the findings from these studies, gather input on park development and management, and develop alternative proposals for park land and waters. As part of the EIS process a second public meeting will be held.

“We recognize the need to integrate planning for the bay and ocean recreation into our master plan for Kealakekua Bay State Historical Park and look forward to working with the local community and the recreation providers to address both management and facility needs” said Dan Quinn, State Parks Administrator. “We know how popular this bay is with both residents and visitors and are seeking input on how we can balance recreational use with the historical and cultural values of this very special place”.

For planning purposes and management, the newly expanded Kealakekua Bay State Historical Park consists of 4 sections: 1) Ka‘awaloa on the northern end of the bay; 2) Nāpō‘opo‘o on the southern end including Hikiau Heiau and Nāpō‘opo‘o Landing; 3) Pali Kapu o Keōua or the steep cliff in the central portion of the bay; and 4) the bay itself.

Ka‘awaloa is a culturally sensitive area with an important archaeological complex that reflects continuous occupation from the early Hawaiian period to 1940. In Nāpō‘opo‘o, Hikiau Heiau is a monumental reminder of Hawaiian tradition. The Nāpō‘opo‘o portion of the park has been more extensively changed by historic land use, recreation and park development, vehicle access to the bay and the surrounding residential community than Ka‘awaloa.

Kealakekua Bay is one of the most significant cultural and historical places in Hawai‘i.  It was listed on the National Register of Historic Places in 1973. As one of the seven chiefly centers of Kona in the 1700s, Kealakekua was a favored place for the ali‘i (chiefs) to reside for part of the year. The Kona field system on the slopes above the bay was an extensive agricultural system growing dry land kalo and ‘uala (sweet potato), and the sheltered bay provided a wealth of marine resources and good canoe landings. The ali‘i compound was centered at Ka‘awaloa while the kahuna (priests) occupied the religious complex at Napo‘opo‘o. It was during the Makahiki season in January 1779 that Captain James Cook arrived at Kealakekua.  Cook’s party spent almost a month recording the settlement at Kealakekua in journals and drawings. Kalaniopu‘u returned to Ka‘awaloa from Maui upon news of Cook’s arrival. Kamehameha was a young chief residing at Napo‘opo‘o. Cook’s death at Ka‘awaloa on February 14, 1779 is marked by the Cook Monument, a white obelisk located along the shoreline at Ka‘awaloa.

Designated a Marine Life Conservation District (MLCD) in 1969, the bay is recognized for its diversity of marine life. Snorkeling and diving at Ka‘awaloa Cove has increased in recent years due to the exceptional abundance of coral and fish in the shallow waters in this portion of the bay. Kealakekua Bay is also significant for the pod of nai‘a (spinner dolphins) that frequent the bay to rest during the day.

In an effort to better manage ocean recreation in Kealakekua Bay, State Parks instituted a permit system in 2013 for all vessels. So far more than 400 permits have been issued for both commercial and private boats, kayaks, and stand-up paddle boards. In addition, State Parks issues revocable permits to three kayak companies to provide guided trips across the bay and land visitors at Ka‘awaloa.

Announcements, meeting notices, updates, and documents for public review and comment will be posted and available on the State Parks website: https://dlnr.hawaii.gov/dsp/ .

Comments on the master plan/EIS process can be shared by e-mail ( [email protected]) or by calling John Kirkpatrick at Belt Collins Hawai‘i LLC at (808) 521-5361.