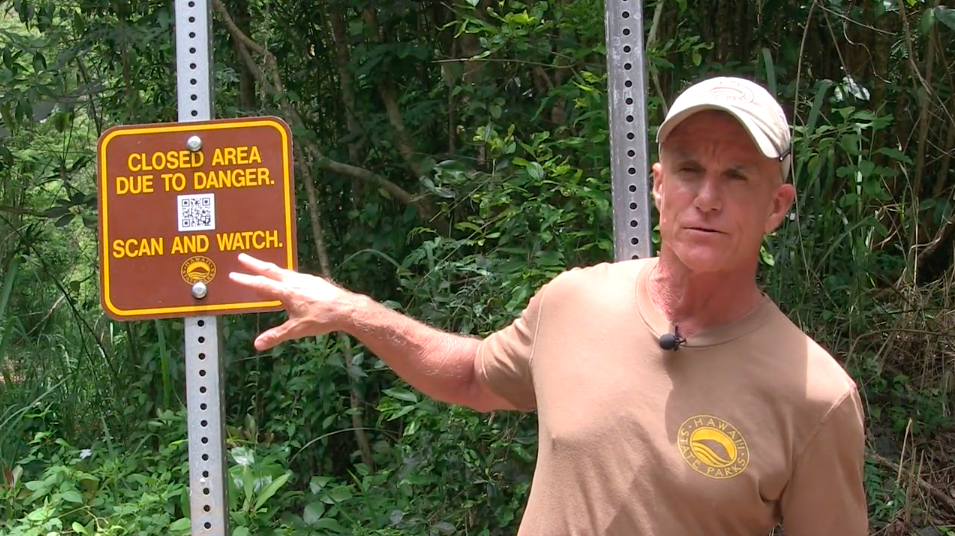 (Honolulu) – Nearly 11,000 people have viewed the on-line video, Sacred Falls-Don’t Risk Your Life, a Fine, or Jail, since it was released by the Hawaii Department of Land and Natural Resources in February 2015. Several popular on-line and social media travel and attractions sites now feature a link to the video and voluntarily removed specific directions to the long-closed park from their web pages.

The video is intended to counter internet sites and blogs that continue to encourage visitation to the closed state park. It was permanently shut down after eight people were killed and several dozen were injured in a 1999 rock fall accident. This week staff from the DLNR Division of State Parks added signs at various access routes to the park with a QRC (Quick Response Code) that links directly to the informational video: https://vimeo.com/119992399.

Curt Cottrell, the assistant administrator for the Division of State Parks said, “Based on our efforts to use social media to combat misinformation about the closed park, which seems to be effective from the number of hits, we are ramping up our efforts to better inform would-be visitors who arrive at Sacred Falls. The QRC signs are additions to ample, existing signage, warning of the dangers and closure. If we can get people to scan the QRC with their phones and spend a few minutes viewing the video that clearly depicts the dangers, cultural sensitivity and penalties for trespass, it may convince them that entering and risking their lives, getting fined or doing jail time is simply a bad idea.”

While officers from the DLNR Division of Conservation and Resources Enforcement (DOCARE) can’t say for sure, it appears the video may be helping. In February DOCARE officers issued 11 citations. Since then, no one has been cited for illegal entry into the park. Last year more than 120 people were cited and had to make court appearances and paid fines for ignoring closed and warning signs. Jason Redulla, acting DOCARE Chief said, “Despite all of our enforcement efforts, the video, and signs, some people will not heed all the warnings and continue to risk serious injury or death. It’s just not worth it.”