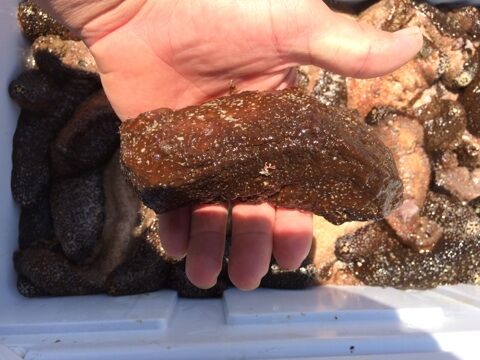 (HONOLULU) – The Hawaii Board of Land and Natural Resources (BLNR)approved a rule today to make it illegal to take any species of sea cucumber from Hawaii State waters for the next 120 days. This is in response to an investigation by officers of the DLNR Division of Conservation and Resources Enforcement (DOCARE), who confirmed that a new commercial fishery recently started. The investigation was supported further by public observations. Governor David Ige is expected to quickly follow the BLNR approval by signing the emergency administrative rules.

DLNR Chairperson Suzanne Case said, “Based on a briefing from DOCARE about their ongoing investigation and recent findings and input from the DLNR Division of Aquatic Resources (DAR), we took the unusual step of fast-tracking this rule to immediately stop the continued depletion of this natural resource.” This decision was further confirmed to be prudent when, “People across the state expressed outrage after seeing photographs and learning about the mass commercial harvesting of sea cucumbers in near shore waters on Maui and Oahu.”

Sea cucumbers are often called “the vacuum cleaners of the ocean,” due to their ability to scour the sea floor and remove sediments and other materials that can impact the health and resiliency of Hawaii’s coral reefs. “We will use the next four months to work with our staff and researchers to better determine the overall impact of large-scale removal of sea cucumbers,” explained Alton Miyasaka, DAR acting administrator. He said, “Since we’ve never seen this extent of exploitation in Hawaii, we need to develop a clear understanding of the impacts on the fishery and aquatic environment.” The results of the DAR inquiry are expected to lead to the development of permanent rules regarding harvesting of sea cucumbers. Permanent regulations will also require BLNR and the Governor’s approval. During this process, DAR staff will work with interested stakeholders, including native Hawaiian traditional and customary practitioners, to come up with proposed rules for the sustainable harvest of sea cucumbers.

Today’s emergency rule making was applauded by officers from the DOCARE North Maui Community Fisheries Enforcement Unit (CFEU). It took the lead into looking into the commercial harvesting of sea cucumbers. CFEU Office Nathan Hillan said, “As a conservation officer it makes me very happy that we were able to get ahead of this in a proactive way. To see the emergency rule enacted and signed is very satisfying as an officer. It lifts up, why we do what we do.”