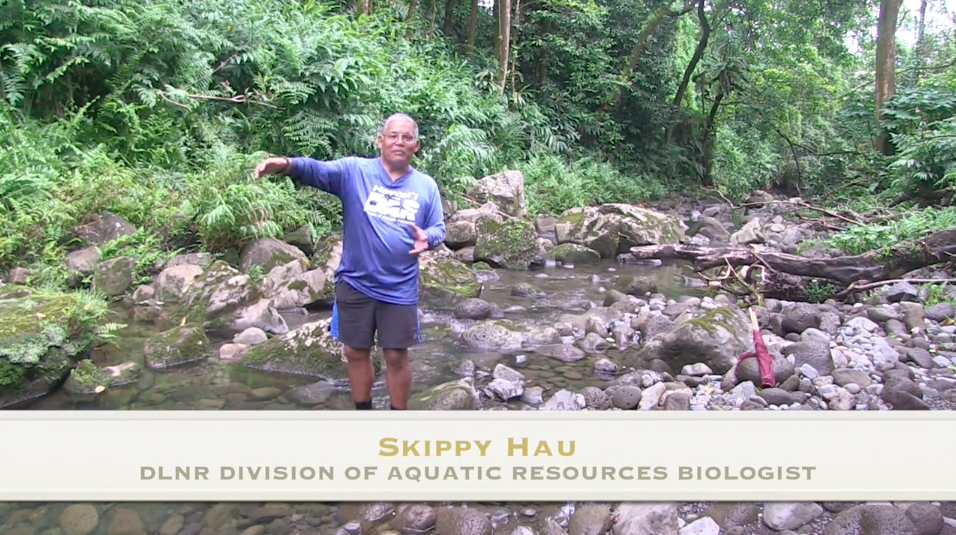 KAHULUI, MAUI – Skippy Hau, an aquatics biologist with the DLNR Division of Aquatic Resources (DAR) has dedicated much of his career to studying the life cycles and movements of fresh water fishes, shrimp, and snails. Carefully navigating the slippery stream beds and rocks of east and central Maui, Hau has collected reams of data on the movements of five fishes (‘o‘opu), shrimp (‘opae), and snails (hihiwai). “Often we think of taking from the ocean only, but historically people have depended on harvests from freshwater streams for sustenance as well,” Hau explains.

It’s easy to see his fascination with these tiny creatures. Consider the hihiwai. They hatch from eggs in the stream and then as larvae they flow out to the ocean where they develop further. Then they begin their long migration back to land; crawling one tiny step at a time up streams and waterfalls to where they grow into adults. They leave a mucus trail and basically play follow-the-leader by following one another upstream. Four species of ‘o‘opu or gobies move upstream in a different way. They have fused pelvic fins which they use like suction cups, grabbing onto rocks and the streambed to travel upward; sometimes many, many miles to the headwaters of a stream. A fifth species (‘o’opu akupa) does not have a fused pelvic fin, but nature has provided for it, by making it a carnivore. It survives in the lower stream and survives by feeding on other fish.

Many Maui streams have been diverted and channelized, sometimes resulting in little to no water flow at the point the stream flows into the ocean. However Hau’s research has shown that even in streams with little to no surface flow, because of diversions, groundwater often continues to provide an estuary with enough fresh flow to ensure continued recruitment of fish, shrimp and snails. He says it’s important to know what’s happening with stream life as it can indicate larger problems in the ecosystem. It’s even more important since so many freshwater ways in Hawai‘i have been diverted since territorial times.

Once each quarter, Hau travels to each of his research sites and replaces temperature loggers that are typically fixed to exposed roots a foot or so beneath the surface of the water. His collected data on temperature differences provides information about the impacts on freshwater creatures from diversions and channelization. “This is more than looking at just a few animals. We also look at other aquatic species and plants, both native and introduced, to give us a better idea of what is happening with the overall health of our watersheds,” Hau said.