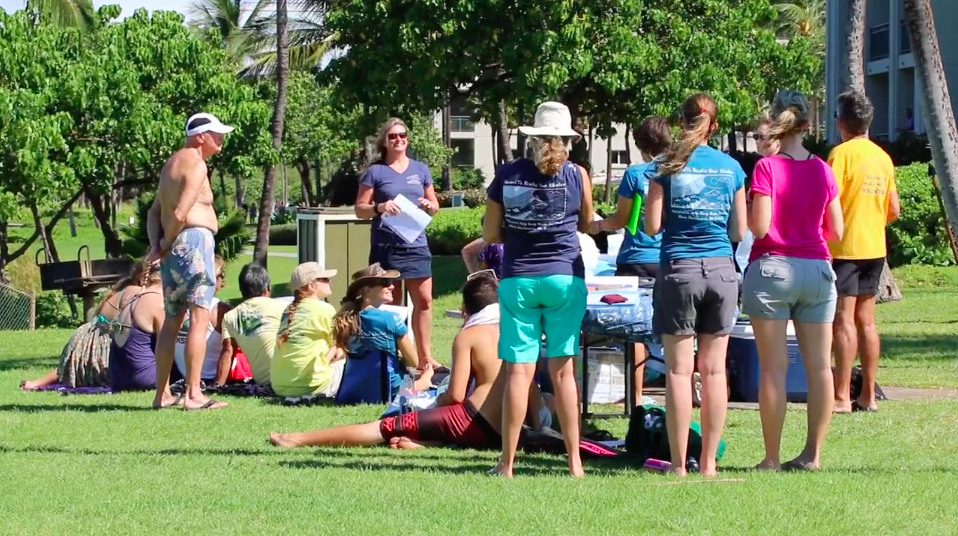 HONOLULU – Hawaii’s unprecedented coral bleaching event this fall prompted dozens of new volunteers to receive training today by the Eyes of the Reef Network (EOR), to spot and report coral bleaching on their local reefs.  Billed as Bleachapalozza, today’s statewide training was  intended to increase the number of trained volunteers in the water, documenting and reporting  bleaching to the network.

On Maui, 28 people gathered at Kahekili Beach Park for training.  They’d hoped to get in the  water to practice their newly acquired skills, but high surf and brown water prevented that.

Darla White with the DLNR Division of Aquatic Resources is the Eyes of the Reef Coordinator for Maui and she provided training for the group.  It began with a tutorial on coral biology and concluded with instructions on how to fill out EOR reporting forms.  White said, “The more trained volunteers we have in the ocean, regularly documenting coral bleaching, will help  aquatic biologists create a fuller data set to further develop action plans to track and address bleaching events.

Bleachapalozza was the brainchild of Maui community organizer Liz Foote. She said,  “The Eyes of the Reef Network plays an integral part in the state’s coral bleaching responses by reaching out to and training ocean users to observe and report coral damage.”

Coral bleaching is a response to stress caused by high ocean temperatures.  Corals turn white, and while this doesn’t necessarily mean they’ve died, they do become much more susceptible to disease and other stresses, which can ultimately kill them.  After last year’s bleaching event many corals did show signs of recovery, but with predictions of continued annual bleaching, the impacts on reef ecosystems around the world continues to be of great concern to scientists and  environmental policy makers.

EOR volunteers submit their observation reports through an on-line system.  As of  mid-afternoon today, 15 new reports of bleaching had been received at www.eorhawai.org .

Once ocean conditions improve, additional reports are expected from the newly trained  volunteers.  Additional training sessions are held around the state on a regular basis and the EOR website has announcements about these.